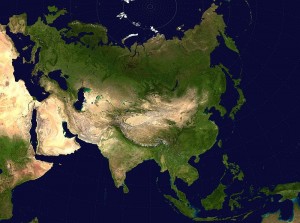 [1]The UN’s new fertility forecasts could have significant implications for predicting which nations will wield global power in the 21stcentury, especially predictions about the coming power shift in Asia where Indians will outnumber Chinese by 2025.

For years UN population experts have said that low fertility and aging societies like China and Europe will have to curtail economic and military power. With higher fertility rates and younger work forces, developing countries like India would gain relative influence in world affairs.

But now, UN demographers have reversed themselves, projecting that all nations will converge by 2100 at a rate of 2.1 children per woman, just enough to replace their parents, but not more. The probabilistic model that UN statisticians used to make these new predictions is severely flawed [2] and experts have rightly criticized it. But the fallout from the new forecast could be significant nonetheless.

Demographic projections matter because, despite their uncertainties, they drive strategic plans. Governments use them to guide health care and family policies, corporations use them to decide where to invest, and security analysts use them to anticipate coming challenges and to plan responses.

The security community’s consensus on the coming China-India power shift makes the UN’s new demographic data all the more puzzling. If true, the new UN projections would call into question the relative size of India’s demographic advantage, the very factor upon which other political and economic advantages depend.

A recent RAND study concluded that India’s vibrant democracy is more likely to harness key components of national competition better than China’s authoritarian regime. Among the four factors—demographics, macroeconomics, science and technology, and defense spending—India currently only has the advantage in the first category, population.

Of the four RAND factors, only population is fixed. Projecting the future youth cohort does not require forecasts but only census data: All of the young people who will be manning the workforce or military units in 2025 have already been born.

The last three factors depend upon New Delhi’s ability to harness its demographic advantage. Heritage Foundation’s Lisa Curtis says, “The more attention Indian officials pay now to coming up with solutions that address these socio-economic challenges, the better poised India will be to ensure its growing working-age population will translate into more leverage and influence on the international stage — and within the Asian power balance.”

Thirty years ago, China was hampered by a backward technological and industrial base, compounded by the ravages of the Cultural Revolution. Yet China’s economic reforms lifted millions out of poverty while setting the stage for the economic boom that continues today. That economic growth depended in large part on Beijing’s ability to tap into its massive reservoir of cheap labor to sustain its manufacturing prowess. In time, India too could follow in China’s footsteps.

But what if India’s coming demographic boom is a bust? And what if China’s apparently terminal demographic decline is not so severe?