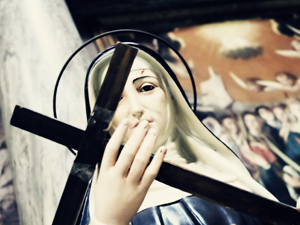 [1]Even those to whom the truth of the Resurrection has been revealed and claim to believe in that truth still struggle in a world broken and corrupted, where might makes right, and where sometimes the immensity of evil tempts us to doubt the divine presence. We live in a world where we see through the glass darkly, and with our human perceptions, fears, and doubts our faith can become shaky. It can be easy to lose hope. This is particularly true for those working in the pro-life apostolate. The culture of death grows stronger, and seems to have seeped into the very marrow of our social institutions.

Recently I was present at an abortuary along with my fellow pro-life workers, begging for the lives of the unborn children marked for death that day. The abortionists were busy. I lost track of the number of “customers.”  The parking lot was full. A lot of innocent blood was being shed in the death chamber.

Not one of the abortion seekers would listen to what we had to tell them about the financial and emotional help which we freely offered to them if they would not kill their children. We were cursed and told to shut up and mind our own business. A father of one of the doomed children came up to me, almost at a run, and threatened to beat the stuff out of me if I said another word.

There is always a palpable sense of evil at abortuaries, but that day the air was heavy with it. It looked for all the world that God had been driven out from that place, and that evil had won the day. In a sense it had.

The renowned Catholic theologian and teacher Romano Guardini wrote that “the abiding figure of Jesus’ life is failure, defeat. Humanly speaking, there has never been a great personality, filled with the glories of the Spirit and endowed with grace, who came to such a wretched end as he did.” Monsignor Guardini went on: “In the sense that he might have achieved a clear victory over the powers of darkness, he did not win out. In the historical sense, they defeated him.”

It is natural to ask why God acts in this way, and asks us to do the same. The short answer is that it is that the omnipotent God’s plan, and that the reason for that plan shall remain a mystery. Nevertheless, we are called to live that mystery, and we cannot do that without seriously reflecting on it.

As we make this reflection we should acknowledge first that our problem was Peter’s problem. We judge by the standards of men and not of God. When we confront the juggernaut of the culture of death, financed and supported by unimaginable wealth and power throughout the world, and even supported by mainstream Christian denominations and various Catholic Universities, we need to stand our ground and focus on Him who, in the measure of the world, “came to such a wretched end.”

An initial point of our reflection might be the Visitation. Consider the scene. Mary, pregnant with Jesus, travels from Nazareth to the village of Ein Kerem in the Judean hill country to visit her cousin Elizabeth, who was pregnant with John the Baptist. Mary arrives and greets Elizabeth, the baby in Elizabeth’s womb leaps for joy, and Elizabeth tells Mary that she is blessed among all women, and that the fruit of her womb is blessed as well. Then Mary prays the Magnificat.

Four persons were present at that event, but there were words or movement from only three. Jesus, the source of the joyful embraces and prayers — He whom St. Paul described as the One who is before all things and in whom all things hold together! — said and did nothing. By the standards of the world this seems really strange. But for those of faith it is a reminder of the essence of the Incarnation. God holds things together and sanctifies in ways that are not always visible to us.

During his earthly ministry Jesus commanded storms, healed the sick, and brought the dead back to life. But he did not bring down fire and destruction on the either the Romans or the Pharisees, or even on King Herod who murdered the Holy Innocents. Those who mocked Him and tortured Him on Good Friday were not struck dead.

So as we stand in front of abortuaries begging for the lives of the unborn and the salvation of the souls of those who take those innocent lives, there is not going to be thunder and fire, or great displays of earthly power. The abortionists will not be swallowed up in flood waters, and the abortuaries will not collapse in earthquakes before our eyes. Not because God is not omnipotent and could not perform these signs, but because that is not His plan.

Mountains are surely moved with faith, but what those mountains may be, the way they move, and when they move is done strictly on the terms of the One who writes straight with crooked lines. His way is more inside out than the reverse. We must listen to the “tiny whispering sound” which Elijah heard and recognized as the voice of God.

Pope Benedict, God’s great and saintly gift to His Church, addresses this subject in the second volume of his book Jesus of Nazareth.

It is part of the mystery of God that he acts so gently, that he only gradually builds up his history within the great history of mankind; that he becomes man and so can be overlooked by his contemporaries and by the decisive forces within history; that he suffers and dies and that, having risen again, he chooses to come to mankind only through the faith of the disciples to whom he reveals  himself; that he continues to knock gently at the doors of our hearts and slowly opens our eyes if we open our doors to him.

And yet — is not this the truly divine way? Not to overwhelm with external power, but to give freedom, to offer and elicit love. And if we really think about it, is it not what seems so small that is truly great? Does not a ray of light issue from Jesus, growing brighter across the centuries, that could not come from any mere man and through which the light of God truly shines into the world. Could the apostolic preaching have found faith and built up a worldwide community unless the power of truth had been at work within it? (Jesus of Nazareth, page 276,277).

So the message for those who work in the pro-life apostolate amidst the death and deception that is at the core of abortion and the blood trade that is the abortion industry, is that the way of Jesus for this evil to be excised from our society is not some great public show of power. Fire and brimstone will not rain down on the abortuaries and on our morally bankrupt cities that feed those abortuaries. Even while we rightly work the halls of legislatures and argue in our courts for legal prohibitions against abortion and euthanasia, we know that lasting protection will only come from within. Grace already rains down from the heavens on the hearts of the abortion seekers, the abortionists, and the abortion enabling politicians. Our job is to knock gently at the doors of those hearts to let that grace in.

This is hard to do. Very hard to do! It is against our deepest instincts. We are wired to protect the underdog, and vanquish the wrongdoers. We instinctively want to overpower the executioners, take Jesus down from the cross, and save Him. But this is not His way. At bottom, working in the pro-life apostolate, like any other Christian apostolate, requires faithfulness and not success by the measure of the world. As Mother Theresa famously said, we are called not to success, but to faithfulness. And while there are indeed times to admonish the hypocrites and clear out those who profane the temples of the Holy Spirit, it is that gentle faithfulness that looks so weak to the abortionists and politicians which will be the instrument of grace that will open hearts and redeem the culture of death.

Monsignor Guardini finished his reflection on the seemingly human failure of Jesus’ life by reminding us that Jesus told us that the grain of wheat must die, and that the secret of Christian living is the way of suffering, and reaches its divine fulfillment only through earthly failure and defeat. “Failure lies at the heart of the life of Christ. It points the way, like the notion of passage, to the understanding of his intimate self.”

St. Paul heard the same, directly from the Lord Himself: “[B]ut he said to me, ‘My grace is sufficient for you, for power is made perfect in weakness.’ I will rather boast most gladly of my weaknesses, in order that the power of Christ may dwell with me. 2 Cor 12:9”

So if we are tempted to lose hope and feel weak and overpowered by the worldly power of the death merchants and those who see the killing of the innocent as the exercise of an absolute freedom, the antidote is to remember that His grace is sufficient, and that as the Pope Benedict reminds us the power of truth is always at work within.