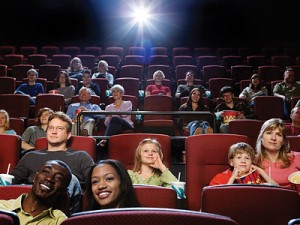 [1]In How to Read a Film, author James Monaco writes that movies “have drastically changed the way we perceive the world… yet we all too naturally accept the vast amounts of information they convey to us in massive doses without questioning how they tell us what they tell.”

When it comes to movies, how we watch is, in many ways, as important as what we watch.

For that reason, it is essential that Catholic viewers, particularly parents, learn how to watch movies properly, not just passively as entertainment, or even aesthetically as art, but critically as powerful purveyors of ideas and values.

What follows are some helpful hints in watching movies through Catholic eyes:

The aspect ratio is the size of the frame a filmmaker chooses to visually tell his story. It can be standard or “wide screen.” Often, when films are reformatted for television, the framing is compressed through a process called “pan and scan” – eliminating portions of the image to cram it into the smaller screen size.

From a faith perspective, the first question viewers should ask is: What is the film’s spiritual aspect ratio? Does the filmmaker reduce his scope to a narrow secular materialism, or is it wide enough to accommodate a transcendent view of reality? Does the movie conveniently pan and scan any hint of God or objective moral truth out of the frame?

This basic outlook shades everything else in the movie. In commenting on literary works (though equally applicable to film), the great Catholic novelist Flannery O’Connor once observed, “It makes a great difference to the look of a novel whether its author believes that the world came late into being and continues to come by a creative act of God, or whether… the world and ourselves are the product of a cosmic accident.”

The next logical question is: What do I see in the frame? Filmmakers use a theater term, mise-en-scene (French for “put in the scene”) to describe all the elements contained in any given shot – actors, sets, costumes, lighting, camerawork, composition, etc.

How about the moral mise-en-scene? What does the filmmaker “put in” the scene that warrants moral consideration?

Though hardly an exhaustive list, some questions to consider include:

The Montage is the Message:

Filmmaking is about the relationship between parts. An image of a revolver followed by a close-up a scared face, suggests someone being held at gunpoint. This is an example of “montage,” a French term that refers to the editing together of shots to visually convey meaning.

What message do the individual elements collectively communicate? Do evil actions have consequences? Does promiscuity or pursuit of material wealth lead to happiness? Is violent behavior rewarded? Is deviancy celebrated or normalized?

The Good, the Bad and the Ugly:

Of course, this does not preclude filmmakers from exploring darker aspects of sinful humanity. Quite the contrary, from a Christian perspective, art – even popular art – in addition to being good and beautiful, must also be true. That means honestly acknowledging the fallen nature of creation. As O’Connor admitted, it is not the responsibility of the artist to tidy up a morally messy world.

It is, however, one thing to depict the ugly reality of violence; it’s quite another to applaud it. It is one thing to show crime; it’s another to suggest it does, in fact, pay.

Speaking to that point in 1955, Pope Pius XII noted filmmakers can legitimately depict sin if it serves “to help deepen knowledge of life and of man, and improve and elevate his soul.”  He also offered a simple barometer in, ultimately, determining a movie’s moral value: Does it affirm the sacred dignity of man?

St. Ignatius Loyola counseled his missionaries to learn the language of the cultures they encountered. For us living in our media saturated world, where movies make up a big part of the lingua franca, that means being functionally fluent in film.

In becoming more cinema literate, it is important that Catholic moviegoers avoid the twin temptations of — to borrow terms from Christian author and film critic Brian Godawa —cultural anorexia (rejecting all movies out of hand) and cultural gluttony (consuming movies “without discrimination”). Key to that is developing a discerning eye. And that starts by being a more active viewer.

As Yogi Berra once said, you can observe a lot just by watching.