A local Catholic leader has warned about the weakening of the Christian presence in Palestine as a result of the construction of an Israeli security barrier. 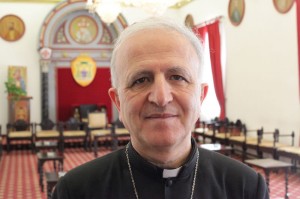 Auxiliary Bishop William Shomali, who is responsible for the Palestinian regions of the Latin Patriarchate of Jerusalem, made his comments while speaking to international Catholic pastoral charity Aid to the Church in Need (ACN).

His comments came after a ruling by an Israeli court on April 24 which rejected the appeals against the construction of the Israeli security wall through the Cremisan Valley near Beit Jala, Bethlehem.

Following extensive legal proceedings that have lasted seven years, the court deemed that for reasons of security it was just and proportionate to confiscate the lands of 58 Christian families in order to build the wall.

Bishop Shomali commented: “It is true that in the case of Cremisan only 58 families are affected and not the whole Christian community of Palestine. But the more incidents we have of this kind the more it challenges the community as a whole.”

The bishop also pointed out that the Christian community will be further weakened by the cutting off of the monastery of the Salesian Fathers from the rest of Beit Jala.

“The Christian community has always found in this monastery a spiritual and inspiring high place,” he said.

If the wall goes ahead, the monastery of the Salesian Fathers, which lies in the Cremisan Valley, will also be cut off, on the Israeli side, from the convent of the Salesian Sisters and its school on the Palestinian side.

Until now the Salesian Fathers have always provided a pastoral ministry to the Sisters and their school.

Bishop Shomali was not convinced by the reasons for the verdict of the court in Tel Aviv.

He commented, “The Israeli system of justice is excellent when it comes to matters other than security. In the case of security-related issues, these prevail over all other aspects.”

“In our case the court claimed that the construction of the wall is necessary to protect the settlement of Gilo. We disagree.”

In reaching its verdict the court had also relied on assurances of the Israeli military that the families affected would have access to their land through an agricultural gate.

The bishop does not regard this as realistic. “Free access may be denied in the future and expropriation may be looming in that case as well.”

“And let’s not forget: We do not want a modus vivendi but justice. And it is utterly unjust to separate families dependent on the income, through olive trees and so on, from their property. This is Palestinian land.”

The bishop added that Israel was totally free to build the wall on the Green Line (from 1949 until the Israeli occupation of West Jordan in 1967 this was the internationally agreed frontier between Israel and the Palestinian territories.)

But Bishop Shomali is not yet ready to give up on the Cremisan issue. The lawyer representing the families affected is considering an appeal to the Israeli High Court, the final arbiter, since the legal process is not yet exhausted.

“We still believe in justice in the Israeli High Court,” the bishop said. “Otherwise we would not continue to fight.”

“With good will and political pressure there might be a different outcome possible.”

Asked whether this included external diplomatic pressure, he confirmed that “every help is welcome.”

Foreign diplomats had been following the issue closely in its earlier stages. “This did not change the court’s mind,” the bishop said. “But at least this impressed the judges and we were treated with respect at the hearings.”

The Jerusalem-based Catholic human rights organization the Society of Saint Yves told ACN last Thursday that it was not clear when the case in the High Court would begin or how long it would last. But since the High Court is the final court of appeal, it must handle the case.

The Society of Saint Yves, an organization under the auspices of the Latin Patriarchate, had represented the Salesian Sisters in the lower courts. It is now planning to submit an appeal as soon as possible to the High Court.

The only aspect that is not yet clear is whether this will be done in collaboration with the families or on its own, a representative of the society told ACN.