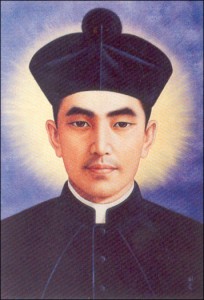 In his moving novel, Silence [2], Japanese-Catholic author Shusako Endo once described the continent of Asia as a “swamp” that choked the sapling of the Gospel and made it uninhabitable for Christianity. That image has always haunted me because a part of my own journey — as a convert to Christianity from Buddhism — has been to bridge two seemingly irreconcilable worlds.

When I first became an Evangelical Christian as a young man, my world was transformed in many ways. But the integration between my new faith and native heritage still seemed somewhat artificial — better than a swamp, yes, but not quite home. That stirring in my heart for something more was what led me into the Catholic Church and why I followed the recent apostolic visit of Pope Francis to Asia with such great interest.

Although I was born and raised in the United States as a son of Cambodian refugees, I know there will always be some kind of intimate connection with the land of my forefathers. I felt Pope Francis was speaking to me when he said [3], “As Asians…you see and love, from within, all that is beautiful, noble and true in your cultures and traditions.  Yet as Christians, you also know that the Gospel has the power to purify, elevate and perfect this heritage.”

No matter where we come from, we cannot ever totally cut ourselves off from that vine from which we were born, nor should we, for we would uproot our very selves. And yet, as Pope Francis says, Christianity does not simply replace or add something superfluous to our existing culture, it actually exalts and transforms it.

When any people encounter Christ, he lovingly cuts part of the old vine, and then grafts it onto something remarkably unexpected — Himself. St. Paul uses this same image in relation to how the gentiles were grafted by God into the vine of Israel: “[Y]ou, a wild olive shoot, were grafted in their place and have come to share in the rich root of the olive tree….” (Romans 11:17).

Ultimately, all cultures come alive and reach their pinnacle in Christ and His beautiful Bride, the Church. In her is where every “tribe, and tongue, and people, and nation” is reconciled (Revelation 5:9). That wonderful realization, learned slowly over the years, is how I came to find peace.

I think it no mistake that Pope Francis used the alternate image of a “budding flower” for the Church in Asia in his address to the bishops of Korea [4]:

May the prayers of Mary, Mother of the Church, bring to full flower in this land the seeds planted by the martyrs, watered by generations of faithful Catholics, and handed down to you as a pledge for the future of your country and of our world.

Indeed, it was fitting to me to learn that the theme of the Holy Father’s visit to Asia was, “Wake up! The Glory of the Martyrs Shines Upon You! [5]” Ever since I first learned of their witness, the saints and martyrs of Asia have been near and dear to my heart because their lives refuted the lie that I had believed for so long: that the Christian faith was alien to our people, that it was incompatible with my heritage.

In older days, it was because one had to be Buddhist, or Confucian, Shinto, Hindu, or Muslim to be “truly” a part of your people. In the 20th century, we were told we could not be Christian because it was bourgeois, foreign, and imperialist. These saints, and now the 124 Korean martyrs that Pope Francis beatified, proved the accusers wrong. I could name off a litany of those saints who are heroes to me:

St. Thomas the Apostle, who first brought the Gospel to India; St. Francis Xavier [6], who died among a people who were not his own out of love for souls; St. Andrew Dung-Lac [7] and Cardinal Nguyen Van Thuan of Vietnam; St. Paul Miki of Japan [8]; St. Andrew Kim-Taegon of Korea; St. Lawrence Ruiz of the Philippines [9]; St. Augustine Zhao Rong and Cardinal Kung Pin-Mei [10] of China, Bishop Chhmar Salas of Cambodia [11], Shahbaz Bhati of Pakistan [12], Fr. Tong Che-Tche…

There are countless others who we will not know until the end of time. They are part of that “great multitude, which no one could count, from every nation, race, people, and tongue” standing “before the throne of the Lamb, holding palm branches in their hands” (Revelation 7:9). For they show us how to truly love our earthly homeland, our families, and the land and traditions in which we are birthed, while drawing our eyes even higher to look upon that heavenly homeland that God calls us to (Hebrews 11:16).

An ancient Christian text, the Epistle to Diognetus [13], tells us this:

Christians are indistinguishable from other men either by nationality, language or customs. They do not inhabit separate cities of their own, or speak a strange dialect, or follow some outlandish way of life. […] And yet there is something extraordinary about their lives. They live in their own countries as though they were only passing through. They play their full role as citizens, but labor under all the disabilities of aliens.

Any country can be their homeland, but for them their homeland, wherever it may be, is a foreign country. Like others, they marry and have children, but they do not expose them. They share their meals, but not their wives. They live in the flesh, but they are not governed by the desires of the flesh. They pass their days upon earth, but they are citizens of heaven.

Because of the martyrs’ example, I truly believe that we will see the faith in Asia come into full in the next millennia. The youthful, vibrant, and hopeful witness of the Church in Asia, born under martyrdom, will have much to teach us in the coming age. Likewise, the elder wisdom of the Western Church will have much to teach the other in drawing her ever closer into the rich patrimony of the universal Church.

The Lord will bring about something new. For the first time in world history, it seems, the spread of the Gospel is finally on the cusp of reaching out from East to West, from one end of the earth to the other. And then, that great hope of the Prophet Isaiah will finally come true:

In days to come,
The mountain of the LORD’s house
Shall be established as the highest mountain
And raised above the hills.
All nations shall stream toward it.

Many peoples shall come and say:
“Come, let us go up to the LORD’s mountain,
To the house of the God of Jacob,
That he may instruct us in his ways,
And we may walk in his paths.”
For from Zion shall go forth instruction,
And the word of the LORD from Jerusalem.
(Isaiah 2:2-3)

The Christian path was never meant to be walked alone. We are meant to truly live within the arms of Holy Mother Church, following after the example of that “great cloud of witnesses” who preceded us in ages past and pray for us even now (Hebrews 12:1). They will lead us the way home.

Church, awake! Arise, O sleeper, the martyrs and saints, from every land, show us the way!