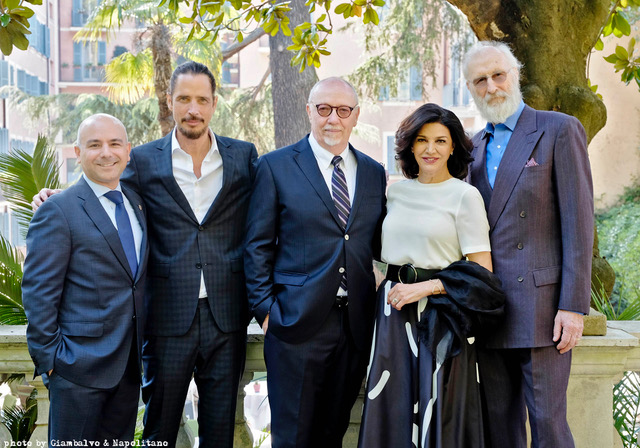 [1]The movie, The Promise [2] about the Armenian genocide, was viewed at the Vatican’s 50-seat screening room on April 4 with director Terry George [3], producer Eric Esrailian [4] and some of the talent. The Pope was not able to attend however senior Vatican officials were in attendance at the screening.

According to Variety [5]: “When there was awareness [within the Vatican] that a major film was being made, we were contacted to screen the movie. So we sent a private link to be viewed,” he said. Although the Vatican is not n the business of endorsing Hollywood movies, this is being taken as a sign of support of the film by the Catholic Church.

Armenia was the first nation to adopt Christianity as a state religion, even before the Roman Empire, so it has a special place in Catholic history. It is located in the modern day country of Turkey, the successor government to the Ottoman Empire.

Pope Francis made his first visit to Armenia in June of last year and sparked an angry response from government officials when he used the term “genocide” referring to the systematic extermination of an estimated 1.5 million out of a total of 2 million Armenians by Ottoman Turks during World War I.

On the first day of his 3-day visit there, the Pope denounced what he called the ideologically twisted and planned “genocide” of Armenians by Ottoman-era Turks a century ago. He was there specifically to mark the 100-year anniversary of the massacre.

He was reported to have ad-libbed the emotionally charged word “genocide” to his prepared text.

The The Guardian [6] reported: “And rather than merely repeat what had said last year – that the slaughter was ‘considered the first genocide of the 20th century’ – Francis declared it a genocide, setting the stage for another Turkish protest after it withdrew its ambassador last year and accused the pontiff of spreading lies.”

The Turkish government, strongly denies that a systematic genocide occurred, claiming that it was wartime and many Turks were killed as well. Yet, 29 countries have officially recognized the mass killings as genocide [7] as well as most genocide scholars and historians.

Turkey reacted angrily the previous year when the Pope quoted a remark by Pope John Paul II in 2001 that called the slaughter the “first genocide of the 20th century.” That remark was made at a Mass at St. Peter’s Basilica to commemorate the 100th anniversary of the Armenian massacres. As a result, Turkey recalled its ambassador to the Vatican for about 10 months and its foreign minister called the use of the word “unacceptable.

In Turkey last summer, Pope Francis “laid a wreath at the foot of the monument, before a group of children who held banners. “Here I pray, with pain in my heart, that there be no more tragedies such as this, that humanity not forget and know how to conquer evil with good; may God grant peace and consolation to the beloved Armenian people and the whole world.”

The Promise tells the story of the Armenian genocide amid the fictional story of a love triangle involving a medical student (Isaac), a journalist (Bale), and the Armenian woman (Charlotte Le Bon). All three are confronted with the Ottomans’ action to round up Armenians.

The love triangle is obviously there to draw in moviegoers who will also learn about the Armenian genocide in the process.

Another film about that era, The Ottoman Lieutenant, film has just been released but Variety critic Dennis Harvey, wrote: “[in] this primarily Turkish-funded production, the historical, political, ethnic and other intricacies — not to mention that perpetual elephant in the room, the Armenian Genocide, which commenced in 1915 — are glossed over in favor of a generalized ‘Whattaya gonna do… war is bad’ aura that implies conscience without actually saying anything.