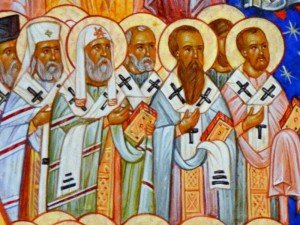 As Christianity Today acknowledges [2], prayers for and to the Saints date back to the early Church (in fact, these practices date back far earlier, even to Old Testament Judaism, but I’ll talk more about that in the next article). Nevertheless, these practices are controversial within Protestantism. Today, I want to look at just one of them — prayer to the Saints — and show why the opposition to it is grounded in a faulty view of life after death. Tomorrow, I’ll look at the Biblical support for both prayer to the Saints and prayer for the Saints.

First, a word on why Protestants tend to object to prayer to the Saints. For some people, such prayers are sinful, since they think it gives glory to someone other than God, or that it’s equivalent to “consulting the dead.” Others view it simply as impossible, since they think that the Saints can’t hear us, or are unconcerned with what’s going on here below. But almost all of these arguments are built upon the same three misconceptions about the souls of the Saints who have gone before us. Given this, let’s present the Biblical view on each of these three major points:

1. The Saints in Heaven are Alive, not Dead

The first mistake in opposing “prayers to the dead” is assuming that we’re praying to “the dead.” One of the most frequently cited passages against prayer to the Saints in Heaven is Isaiah 8:19,

And when they say to you, “Consult the mediums and the wizards who chirp and mutter,” should not a people consult their God? Should they consult the dead on behalf of the living?

Those who oppose prayer to the Saints present a straightforward argument: the faithful departed are dead, and it’s sinful to “consult the dead.”

But the first premise — that the faithful departed are dead — is false, and directly contrary to Scripture. Jesus actually denounces this view as Biblically ignorant (Mk. 12:24). He reveals the truth about the Saints when He says, “I am the resurrection and the life; he who believes in me, though he die, yet shall he live, and whoever lives and believes in me shall never die” (John 11:25-26). And in response to the Sadduccees, He says (Mark 12:26-27):

And as for the dead being raised, have you not read in the book of Moses, in the passage about the bush, how God said to him, “I am the God of Abraham, and the God of Isaac, and the God of Jacob? He is not the God of the dead, but of the living; you are quite wrong.”

So the Protestant view that says that Abraham, Isaac, and Jacob are “dead” is “quite wrong.”

Read the literature written against prayers to the Saints, and see how frequently they’re mischaracterized as “the dead.” This isn’t a harmless mistake. The passages warning against “the dead” simply don’t apply to the question of the Saints. Indeed, a great many popular assumptions about the afterlife are built on the idea that verses like Psalm 115:17 (“The dead do not praise the LORD, nor do any that go down into the silence”) apply to the Saints in Heaven. They don’t, and Christ tells us that they don’t.

2. The Saints in Heaven are Witnesses, not Sleeping or Ignorant

Related to the first mistake is the idea that the departed Saints are cut off from us on Earth, and that it’s therefore immoral (or at least futile) to communicate with them. This belief takes two general forms: first that the souls of the just are “asleep” until the Resurrection; second, that the souls are isolated in Heaven.

In addition to all this, praying to dead saints today assumes the doctrine of the immortal soul, which many people are surprised to find is not taught in the Bible. The Bible teaches that death is like sleep that lasts until the resurrection at Jesus Christ’s second coming (1 Thessalonians:4:13-16 ).

Now, United Church of God aren’t mainstream Protestants by any stretch: they are Sabbatarians (meaning that they reject Sunday worship) and they reject the Trinity. But this notion of soul sleep can be traced to Martin Luther [4], who wrote:

For the Christian sleeps in death and in that way enters into life, but the godless departs from life and experiences death forever […] Hence death is also called in the Scriptures a sleep. For just as he who falls asleep does not know how it happens, and he greets the morning when he awakes, so shall we suddenly arise on the last day, and never know how we entered and passed through death.

Even Luther’s most militant supporters [5] concede that he held some sort of confused and often-contradictory notion of “soul sleep.” So, too, did many of the Radical Reformers. In this view, the souls of the Saints aren’t “conscious,” and so it would be futile to ask them for prayers.

The second camp rejects soul sleep, but thinks that the souls in Heaven are isolated from us. For example, the website “Just for Catholics” acknowledges that the first half of the Hail Mary comes directly from Scripture, but says that these Scriptures aren’t permitted to be used as prayer [6]:

Even though the first two sentences are taken from the Bible, it does not mean that it is right to use them as a prayer. Mary could hear the salutations of the Gabriel and Elizabeth because they spoke in her immediate presence. Now Mary is dead and her soul is in heaven. She cannot hear the prayers of thousands and thousands who constantly call upon her name. Only the all-knowing God can hear the prayers of His people.

But Scripture doesn’t present the Saints in Heaven as isolated or spiritually asleep. Rather, even in their “rest,” they’re presented as alert and aware of the goings-on of Earth (Revelation 6:9-11):

I saw under the altar the souls of those who had been slain for the word of God and for the witness they had borne; they cried out with a loud voice, “O Sovereign Lord, holy and true, how long before thou wilt judge and avenge our blood on those who dwell upon the earth?” Then they were each given a white robe and told to rest a little longer, until the number of their fellow servants and their brethren should be complete, who were to be killed as they themselves had been.

Perhaps the clearest description of the relationship between the Saints in Heaven and the saints on Earth is in the Book of Hebrews. Chapter 11 is a litany of Saints who lived by faith, leading immediately into this (Heb. 12:1-2):

Therefore, since we are surrounded by so great a cloud of witnesses, let us also lay aside every weight, and sin which clings so closely, and let us run with perseverance the race that is set before us, looking to Jesus the pioneer and perfecter of our faith, who for the joy that was set before him endured the cross, despising the shame, and is seated at the right hand of the throne of God.

The spiritual life is compared to competing in a race, an image that Paul uses elsewhere (1 Corinthians 9:24-27; 2 Timothy 4:6-7). Here, the imagery is fleshed out to show that the Saints in Heaven are a great crowd of witnesses in the stands. Obviously, this idea of the heavenly Saints as “a crowd of witnesses” is incompatible with the idea that they’re either asleep or unavailable to see us.

3. The Saints in Heaven are Still Part of the Church

The Biblical depiction of the Saints as the heavenly witnesses in the grandstands of our spiritual race rebuts a third view: namely, that the Saints are enjoying God’s company so much that they’ve stopped caring about us. For example, a Christian Post column [7] on the subject seems to suggest that the Saints don’t do anything for us once they’re in Heaven:

So yes, they are not really dead. But that doesn’t mean they hear our prayers, or provide even the slightest bit of assistance in answer to our prayers, regardless of how noble their lives may have been while on earth. God doesn’t use saints in heaven to bless saints on earth. Instead, God utilizes His holy angels to minister to His children on earth.

Such a view gets things entirely backwards. Rather, their holiness and their enjoyment of God means that they love us and care for us all the more. That’s why they’re witnesses to our spiritual race; that’s why the martyrs in Heaven are still concerned with justice on Earth. The more we love God, the more we love our neighbor. And the Saints love God with a perfection impossible to us here below.

But God has so composed the body, giving the greater honor to the inferior part, that there may be no discord in the body, but that the members may have the same care for one another. If one member of suffers, all suffer together; if one member is honored, all rejoice together.

So both perfect Christian charity and our union in the Body of Christ help to account for why the Saints intercede for us.

Scripture repeatedly calls for us to pray for one another (e.g., 1 Thessalonians 5:25; 2 Thes. 3:1; Colossians 4:3; Hebrews 13:18), to make “supplications for all the saints” (Ephesians 6:18), and for “supplications, prayers, intercessions, and thanksgivings” to be made “for all men” (1 Timothy 2:1). Neither in praying for one another nor in asking one another for prayers do we risk offending God in the slightest. Quite the contrary: “This is good, and it is acceptable in the sight of God our Savior, who desires all men to be saved and to come to knowledge of the truth” (1 Tim. 2:3-4).

The Catholic position simply applies these Scriptural teaching to the entire Body of Christ, while the standard Protestant position says that these teachings don’t apply to the parts of the Church that are already in Heaven. The view goes awry in calling for us to ignore an entire portion of the Body of Christ: urging us not to pray for the faithful departed, and not to ask the Saints in glory to pray for us. Scripture calls for us to “have the same care for one another,” to suffer and triumph with the other parts of the Body. The Saints’ glory is ours; our struggles are theirs.

As you can see from the above post, many of the most popular arguments against praying to the Saints are based on false ideas about what happens to the souls of the just after death: thinking that the Saints are dead, or asleep, or isolated, or apathetic, or outside the Church. In fact, they’re alive and before God, yet still connected to us, witnessing our triumphs, failures and struggles, all the while rooting for us and praying for us.

With a correct view of the state of the glorified Saints and their role in the Church, most of the arguments against seeking their intercession simply dissolve. There’s simply no good reason to cut the heavenly Saints off from the rest of the Body. You’re surrounded by Heavenly witnesses who are supporting you in your spiritual race. What’s more, they’re your brothers and sisters in Christ. Given this, by all means, ask for their spiritual help and encouragement!

[Editor’s note: this article first appeared at Shameless Popery [8]. It is the first of three that will be published this week at Catholic Lane in prospect of All Saints’ Day, Sunday, Nov. 1st.]