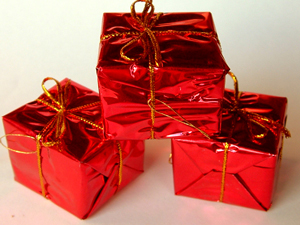 [1]“I have always depended on the kindness of strangers,” drawls Stella in Tennessee Williams’ “A Streetcar Named Desire.”

And it’s particularly true if you have a large family. Strangers as well as friends often provide our large family with their extras – a wonderful, win-win redistribution which helps level our budget shortfalls.

But true giving – it’s hard. Not everyone can do it. Those who can have earned the skill by practice.

Maybe you’ve had this conversation with a gift-or:

“I’m just so glad not to be donating it to Salvation Army or Goodwill,” they confide to you. “You never know if the person who buys it will treat it properly.”

This is your first clue. They’re not really giving you the item.

Oh, it’s now in your possession, but they are still fully attached to it and will need regular status reports about its well-being.

“How’s that __________ working out?” They might interject casually some days later. “Did it work/fit/match okay?” Here, you will likely hear a story about how the item was used while it was in their care.

If all is well, you thank them again, re-iterating your pleasure to receive such a gift.

If the item is not functional and you tell them, a cloud passes over their features. Once, a lady who had kindly gifted us with toys was incensed to learn that one of them had broken under the admittedly harsh hands of one of my children.

“When I was a child, we were taught to take care of our toys,” she snapped.

And I understood why she was angry. My child had broken her toy. It was still hers. In her heart, she had never let go.

1) An Intellectual Sacrifice, or agreement to part with the item.

In the case of old Tupperware, this one is easy. In the case of a item you’ve had since childhood, or an item belonging to a now deceased friend or relative, anything from mild sadness to major guilt accompanies the thought of releasing it. Especially if you are releasing it to the trash.

Sometimes painful because you must actually place the item in another person’s hand or car, or drop-off location and walk away. Adding insult to your struggle, the recipient may not thank you, or even fully appreciate what you have given them. In creeps the temptation to bitterness, resentment, anger.

3) A Sacrifice of the Will – Detachment

This last one’s the clincher – you have to mentally release the item. It’s not yours anymore. Letting go of the intangible strings that attach you via nostalgia, greed, or selfishness is – oh, it’s hard. And it may take a few bouts of letting go before the mental release is complete. When you release your hand, you must also release your heart. It feels good when you do.

True detachment from an item means you no longer have a say in how it’s used, cared-for, or stored.

If you are releasing an item, you may not make regular inquiries into its whereabouts or well-being.

A real gift doesn’t complicate a relationship with feelings about their inadequacy to care for your – I mean ‘their’ – item.

In Tolkien’s Fellowship of the Ring, Bilbo Baggins must give up the Ring which has become his obsession. He makes and breaks his intellectual assent several times before, with the help of Gandalf, the wizard, he decides to leave it to his nephew, Frodo.

Even after his decision, though, Gandalf must remind him that he has not physically released the Ring. Bilbo does so with trepidation and anguish.

For him, detachment from ownership seems easy. He squares his shoulders and marches away, singing, relieved. But months and years later, he is still dwelling on the Ring, asking the new caretaker about its well-being and whereabouts, disappointed to hear it has gone missing.

This detachment is needed not only for items, but also for projects, positions, and adult children.

It hurts, requires constant effort, and humor. “I can’t believe I’m still thinking about that old _______,” you can laugh. “I don’t need to worry about that anymore,” you might reassure yourself. “I’m not in charge of it any longer.” “It’s not sitting in a box anymore. God will take care of it,” you can say.

Occasionally, I will accept gifts as a work of charity.

An elderly friend cleaning her craft room was having a terrible time releasing her fabric remnants. “Can you use them?” she pleaded.

“Oh, yes!” I assured her, packing all seven boxes of fraying psychedelic left-overs from the 1960s and 70s into my van before she could re-open them. I knew if she stopped to finger and consider each remnant, most of them would never leave her house. My next stop was Goodwill, where the still serviceable pieces found a home. Afterward, the dump.

“Twelve huge bags of clothes? Thank you!” I gushed to a beaming lady who offered clothing which had been stored in a mouse-infested attic for thirty years. Friends donned gloves and armed with plastic bags we sorted, tossed, washed, and redistributed via Freecycle what little could be saved.

True gifts are of good intention, given with a smile, and never mentioned again. Giving the gift of receiving allows people an easier way to let go.

One final thought – as you perhaps fret and fume over the lack of gratitude for and mistreatment of ‘your’ gifts, please consider your new understanding of our Heavenly Father’s daily experience. He daily gives his best – his SON – and really, very few even care.