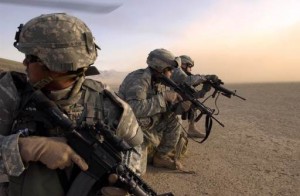 [1]A troubling pattern of putting U.S. and allied security interests second to the Obama administration’s political priorities is now well-established.  If allowed to continue, it will not only make the world more dangerous.  It is going to get people killed – probably in large numbers and some of them may be Americans.

A prime example of the phenomenon was the disclosure of minute details of the 2011 raid by SEAL Team 6 within hours of its successful liquidation of al Qaeda leader Osama bin Laden in Pakistan.  The revelation of special operations tradecraft horrified those in and out of the U.S. military who appreciate that safeguarding the secrecy of such techniques is essential to ensuring their future utility, and the safety of those who employ them.

The really galling thing, though, was that such secrets were compromised for the transparent purpose of touting Mr. Obama’s decisiveness and competency as Commander-in-Chief.  Regrettably, such qualities have not been much in evidence, either prior to or after that raid.  For that matter, notwithstanding Vice President Joe Biden’s characteristically preposterous description of the operation as “the most audacious plan in 500 years,” it is not entirely clear what his boss’ role was in the execution, let alone the conception.

Still, given the importance now being attached to this narrative of vision and courage in the Obama reelection campaign, it is clear that the serial disclosure of state secrets by, most notably, the President’s counter-terrorism guru, Deputy National Security Adviser John Brennan, was in the service of a political cause.  Call it the ends justifying the means.

More recently, “four senior diplomats and military intelligence officers” reportedly fed Foreign Policy Magazine contributor Mark Perry a salacious story about Israel enlisting Azerbaijan in its plans for staging aircraft in an attack on Iran.  Perry claims that “a senior administration official told [him] in early February that ‘The Israelis have bought an airfield, and the airfield is called Azerbaijan.’”

If true, such a disclosure would fit the pattern of deliberate, concerted and damaging leaks of exceedingly sensitive information in order to advance Team Obama’s political agenda.  In this instance, that agenda would be to prevent any strike on Iranian nuclear and perhaps other targets by the Jewish State before the November elections.

True or not, the revelation has had the desired effect:  It put the Azeri government of President Ilham Aliyev on the spot and forced it to disavow any such collaboration with Israel.  While some have questioned the integrity of the author and the logic of his thesis, the trouble is, it certainly sounds like the Obama administration to see such a stunt as a highly desirable two-fer: an opportunity to undermine Israel’s security, while effectively protecting Iran.

It seems that a similar calculation moved the Obama administration to divulge what appeared on the front page of the Washington Post’s Sunday editions:  An article citing unnamed White House and intelligence sources – including “a senior U.S. official involved in high-level discussions about Iran policy” – that revealed details about the intelligence operations and capabilities the United States is said to have brought to bear lately against Iran.

The ostensible purpose of these initiatives has been the monitoring and disabling of the Iranian nuclear weapons program.  Among the insights: the CIA has stood up and greatly expanded a unit dubbed “Persia House” for the purpose of monitoring and running covert actions against Iran.

In the article, much was made of the growth of this organization, its use of stealthy unmanned drones to collect signals and other intelligence deep in Iran and U.S. involvement in computer worms, assassinations of Iranian nuclear scientists and explosions in certain sensitive facilities involved in Iran’s weapons program.

The point of these leaks of exceedingly sensitive activities – at least some of which could constitute acts of war, however, seemed once again to be cynically manipulative:  It appears designed to show the American people that everything is under control.  Team Obama is working the problem, skillfully employing intelligence assets to prevent Iran’s nuclear ambitions from being realized without using military force.

The Post story also served as a vehicle for reiterating the administration’s party line:  The mullahs have not decided to acquire an actual weapon and are at least a year away from getting one.  And, what’s more, we will know should that decision be taken in plenty of time to do something about it.

We would all wish these assurances to be accurate.  Unfortunately, the problem with the Obama administration’s practice of playing fast-and-loose with information that is secret for a reason – it might be called “political compromise,” but that would be the only sense of the term this president seems to favor – is that it almost certainly will jeopardize our security, and that of other freedom-loving people.