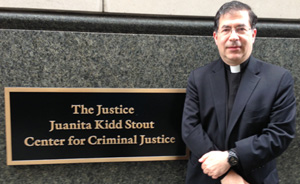 A lot of attention was given recently to the Little Sisters of the Poor, and the way that the Obama Administration wants to force them to cooperate in its plan to expand access to contraceptives, abortion-inducing drugs, and sterilization. They are rightly saying “No,” and, like us at Priests for Life, have said it through a federal lawsuit.

Like the case of Priests for Life, their lawsuit initially resulted in a judgment against them, with the court saying that the mandate did not in fact pose a “substantial burden” to their religious freedom.

And like us, the Sisters went to the appellate court for an emergency injunction against the mandate, which otherwise would have been enforced against them starting on January 1.

This past New Year’s Eve, the Little Sisters of the Poor and Priests for Life had very similar experiences. December 31 came with no immediate protection from the mandate, and the prospect of having it go into effect the next day. December 31 also came with both groups having a request for an emergency injunction in the hands of two different federal courts.

And the hours ticked by while we waited.

As morning turned into afternoon, our attorney reminded us that in case the injunction were denied, one of the things we could do was to send an emergency appeal to the Supreme Court, and it would be assigned to one of the Justices to either grant the injunction or not.

As things turned out, the Court of Appeals for the DC Circuit granted the request of Priests for Life for emergency injunction, just before 5pm. (Phone calls to the court just before that said they were closed for the holiday, but we reached someone who told us that everyone had left except the judges that were working on our case, along with their clerks!)

I relate all this to paint a simple picture: two Catholic groups, one run by religious sisters and one by priests, having to demand, through emergency measures, that they not be forced to violate their consciences. The group of sisters serves the poor; the group of priests serves the poorest of the poor, the unborn. And both simply want to do their work while worshiping God in the way they see fit.