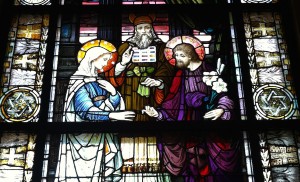 [1]Every year at Christmas time I think of the many people who experience a more acute loneliness that the season has a way of drawing out of those who are literally alone or feel alone, even among their friends and family. It’s an inescapable desire to have that one special person with whom you can share the joys of Christmas.

And every year I am also drawn to the mystery of Mary and Joseph; two unique, individual persons called to the most unusual marriage that would bring about the Saviour of the world.

We know very little about these two individuals, just enough to see their role in salvation history. Details of their lives, about who they were as persons, and what went on in their marriage were not meant for us to know.

Yet, we like to speculate, don’t we? Did they ever disagree with each other or have a marital spat? Did they stress over their financial situation? Did they have problems with friends or family who tried to interfere?

The beauty and grace of their story is of a woman fashioned by God to be without sin from her conception so that her womb would be the worthy dwelling place for God’s son, fulfilling prophecy of old that a virgin would bring forth the savior of the world and would come through the line of David. It is also the story of a man chosen by God to take care of this Arc of the New Covenant and the Christ Child. With the eyes of grace, this all makes perfect sense and is not to be questioned.

With the eyes of an onlooker and historian, we know that Mary and Joseph had an arranged marriage, that Mary was pregnant before the marriage, that Joseph was not the father and decided to divorce her, and that it took divine intervention to redirect Joseph back toward his calling to marry Mary. We know he did so, and served Jesus and Mary all his life in a marriage that lasted until death.

It doesn’t appear to be the best way to start off a marriage. But obviously, with God’s grace and true love, it was a good marriage.

Did they have any actual problems in the marriage? Who knows? No one. But it is assumed they did not.  Their marriage must have been perfect, because they were saintly people. I suppose that’s why so many single women wish to find their St. Joseph, and single men wish to find a woman like Mary.

It’s a mistake to put this kind of standard on the person you wish to find for marriage, because the relationship between Mary and Joseph was inhuman. In other words, it just wasn’t normal. I’m not saying they were not human beings.  They were. And I’m not saying their marriage was not something to be emulated. It can. What I am saying is there are no Marys or Josephs to be found.  And there will never be a marriage like Mary and Joseph’s ever again, nor should there be.

Their love for each other and their dependence on the grace of God (which we know as Sacramental) everyone must strive for.  But the individuals and the practical life of their specific marriage?  Don’t even think about it.

The marriage of Mary and Joseph was a life of celibacy. Mary was “ever virgin”, never to “know” a man. Mary and Joseph never had marital relations. That can never be emulated by any Christian couple.

It borders on blasphemy to speculate on any sexual struggles Mary and Joseph might have had. But many think it stands to reason that they must have, or at least Joseph must have. Based on the doctrine of the Immaculate Conception, Mary would have no such struggle with sexual temptations. But within marriage, it is not wrong to have a desire for sexual relations with your husband. However, Mary’s role was to have one child, the Christ Child, and to remain a virgin.

That would mean that Joseph was also called to this life of celibacy.  This is the part that fascinates me most. This is a man who was called by God to marry a woman and never have a sexual relationship with her.

First, there are no men a woman can find who are not interested in having sex. That’s not a bad thing, except if they push to have it outside of marriage.

Second, no woman should ever want to be in a marriage with a man who does not want sexual intimacy with her. This intimacy bonds the two in love and produces the children that grow their family.

Does this mean Mary and Joseph did not bond in love or have a real marriage? Of course not. Their love for each other was centered on God, and the family they were to establish was meant for them alone.

Did Joseph struggle with this calling to celibacy within marriage?  Who knows?  It stands to reason that as a human being with Original sin (like all men), he must have. But it makes sense that he would have been given a very unique grace from God that would keep him from this struggle.

This is why there are many scholars and authorities in the Church who believe Joseph was also conceived without Original sin, like Mary. That also makes sense. Either way, Joseph did successfully remain celibate throughout his marriage to Mary, and that is inhuman.

If there must be a search for a Joseph or Mary, let it be for someone who has a heart and desire for God as the authority in their lives and an ability to love another in service to one another. Mary and Joseph we obedient lovers of God. Despite their better judgment, they believed in what God was asking them to do. They weren’t caught up in what they wanted for themselves, but what God wanted of them.

This is the lesson of what marriage truly is at this festive and holy time of year. Two people who come together because God has brought them together and expects them to love each other in service. That relies on God’s grace to live out what’s expected of them in marriage.

The inhuman relationship of Mary and Joseph is because they are the two most uniquely special persons created by God for a specific role in salvation history and who were not sinners like the rest of us. But their love for each other is totally human and accessible to all with God’s grace.

No matter who that person is who will end the loneliness and share your life, they are human and a sinner, unlike Mary or Joseph. Marriage is always a rocky road only smoothed out over time by mutual love and a life of grace with God as the authority. Mary and Joseph lived under that star. May the star of Bethlehem be what lead all couples to the Christ Child, and the two special servants of God who put God above themselves in all things. That is Christmas.