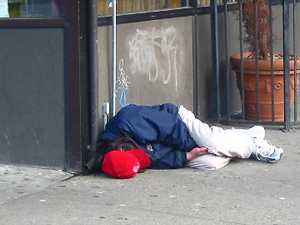 [1]As I write, the weather station says that it’s 1° F, but it feels like -17°F. With the wind chill, it’s expected to drop as low as -30°F tonight. Tomorrow will more of the same. Even with the furnace chugging away, the perimeters of the house are cold. Upon passing by the windows and doors, one would swear they were wide open; sometimes as I go by, I check just to make sure. They’re closed. This is a pretty sturdy house, but in cold temps like this, nothing stops the drafts. My ceramic mug with the silicone lid keeps my tea hot for only a short time, so I drink it fast because I’m feeling too lazy to reheat it. I’m grateful for my lined hoodie and double-layered sweatpants, even though I still shiver a bit here and there, because I know there are folks out in this night wind without warm clothing. Although I dread the cold weather and complain about it every year, I know it could be so much worse, and for some folks, it is.

Some years back, I did a story on homeless shelters for the Milwaukee Journal Sentinel, and it truly was a life-changing experience. I know journalists say that a lot – and I’ve said it myself in the past – but I really do mean that it changed my life. I was a twenty-something upstart and had heard that homeless people are homeless because they want to be. They’re slovenly and lack ambition, I was told. If they had the will power, they could pull themselves right up out of those gutters and live a normal life. I believed all that, hook, line, and sinker. Until I walked into my first homeless shelter.

It was during a cold snap similar to the one we’re going through right now, and my task was to report on how the shelters were managing, since there was sure to be an influx of persons needing protection from the elements. The director, an energetic guy dressed in jeans and a sweatshirt, took me on the grand tour of the converted century-old school building. The rooms were filled with rows upon rows of beds – collections of mismatched frames and bedding – not all that comfortable looking, but better than concrete and cardboard in the sub-zero temps. There were tables and chairs in some of the corners in case anyone wanted to play cards or chew the fat. The kitchen was set up with hot coffee and tea and some donated baked goods, but not much else since the budget didn’t really permit it. Basically, the director explained to me, the shelter’s task wasn’t to feed or clothe the guests, but simply to keep the homeless from freezing to death. Taking all of this in, I couldn’t imagine how any human being would want to be forced into such conditions.

What struck me harder were the faces of the guests. They were not the faces of contented people having the time of their lives; they were the faces of distraught individuals who had run out of options. The faces spoke of hardship and a strange camaraderie among those who shared the same plight – a contorted, desperate brotherhood. Yet, overshadowing the despair was an air of gratitude and peace because, for at least one night, they had a warm place to sleep and the company of others who understood them and their unfortunate circumstances.

That drafty old building, the maze of beds, and the weary, strained faces of the homeless, have remained with me all these years. I think of them when it snows, but especially I think of them when the temp drops below zero. I think of them as I pile on another layer of clothing and wrap my chilly hands around a mug of hot tea. I think of them, but also I pray and offer sacrifices for them, and I urge others to do the same. The homeless don’t choose to be homeless; they’re real people who, for a variety of causes and reasons, have become stuck in a wretched cycle of destitution and shame. No one wishes nor deserves that.

I noticed that, in the latest edition of the Milwaukee Journal Sentinel, there’s an article on how the homeless shelters are faring during this cold snap. Another young reporter is being initiated into the reality of the homeless. I hope, I pray, that it impacts her as deeply as it did me so that she, too, never forgets.