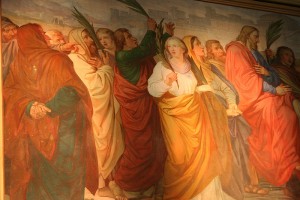 Palm Sunday is the great doorway leading into Holy Week, the week when the Lord Jesus makes his way towards the culmination of his earthly existence.

He goes up to Jerusalem in order to fulfil the Scriptures and to be nailed to the wood of the Cross, the throne from which he will reign for ever, drawing to himself humanity of every age and offering to all the gift of redemption.

We know from the Gospels that Jesus had set out towards Jerusalem in company with the Twelve, and that little by little a growing crowd of pilgrims had joined them. Saint Mark tells us that as they were leaving Jericho, there was a “great multitude” following Jesus (cf. 10:46).

On the final stage of the journey, a particular event stands out, one which heightens the sense of expectation of what is about to unfold and focuses attention even more sharply upon Jesus. Along the way, as they were leaving Jericho, a blind man was sitting begging, Bartimaeus by name. As soon as he heard that Jesus of Nazareth was passing, he began to cry out: “Jesus, Son of David, have mercy on me!” (Mk 10:47). People tried to silence him, but to no avail; until Jesus had them call him over and invited him to approach.

Jesus said: “Go your way, your faith has made you well.”

Bartimaeus regained his sight and began to follow Jesus along the way (cf. v. 52).

And so it was that, after this miraculous sign, accompanied by the cry “Son of David”, a tremor of Messianic hope spread through the crowd, causing many of them to ask: this Jesus, going ahead of us towards Jerusalem, could he be the Messiah, the new David? And as he was about to enter the Holy City, had the moment come when God would finally restore the Davidic kingdom?

The preparations made by Jesus, with the help of his disciples, serve to increase this hope.

As we heard in today’s Gospel (cf. Mk 11:1-10), Jesus arrives in Jerusalem from Bethphage and the Mount of Olives, that is, the route by which the Messiah was supposed to come. From there, he sent two disciples ahead of him, telling them to bring him a young donkey that they would find along the way. They did indeed find the donkey, they untied it and brought it to Jesus.

At this point, the spirits of the disciples and of the other pilgrims were swept up with excitement: they took their coats and placed them on the colt; others spread them out on the street in Jesus’ path as he approached, riding on the donkey.

Then they cut branches from the trees and began to shout phrases from Psalm 118, ancient pilgrim blessings, which in that setting took on the character of messianic proclamation: “Hosanna! Blessed is he who comes in the name of the Lord! Blessed is the kingdom of our father David that is coming! Hosanna in the highest!” (v. 9-10).

This festive acclamation, reported by all four evangelists, is a cry of blessing, a hymn of exultation: it expresses the unanimous conviction that, in Jesus, God has visited his people and the longed-for Messiah has finally come. And everyone is there, growing in expectation of the work that Christ will accomplish once he has entered the city.

But what is the content, the inner resonance of this cry of jubilation?

The answer is found throughout the Scripture, which reminds us that the Messiah fulfils the promise of God’s blessing, God’s original promise to Abraham, father of all believers: “I will make of you a great nation and I will bless you … and by you all the families of the earth shall bless themselves” (Gen 12:2-3).

It is the promise that Israel had always kept alive in prayer, especially the prayer of the Psalms.

Hence he whom the crowd acclaims as the blessed one is also he in whom the whole of humanity will be blessed.

Thus, in the light of Christ, humanity sees itself profoundly united and, as it were, enfolded within the cloak of divine blessing, a blessing that permeates, sustains, redeems and sanctifies all things.

Here we find the first great message that today’s feast brings us: the invitation to adopt a proper outlook upon all humanity, on the peoples who make up the world, on its different cultures and civilizations.

The look that the believer receives from Christ is a look of blessing: a wise and loving look, capable of grasping the world’s beauty and having compassion on its fragility. Shining through this look is God’s own look upon those he loves and upon Creation, the work of his hands. We read in the Book of Wisdom: “But thou art merciful to all, for thou canst do all things, and thou dost overlook men’s sins, that they may repent. For thou lovest all things that exist and hast loathing for none of the things which thou hast made … thou sparest all things, for they are thine, O Lord who lovest the living” (11:23-24, 26).

Let us return to today’s Gospel passage and ask ourselves: what is really happening in the hearts of those who acclaim Christ as King of Israel?

Clearly, they had their own idea of the Messiah, an idea of how the long-awaited King promised by the prophets should act.

Not by chance, a few days later, instead of acclaiming Jesus, the Jerusalem crowd will cry out to Pilate: “Crucify him!”, while the disciples, together with others who had seen him and listened to him, will be struck dumb and will disperse. The majority, in fact, was disappointed by the way Jesus chose to present himself as Messiah and King of Israel.

It is a crucial question, one we cannot avoid, not least because during this very week we are called to follow our King who chooses the Cross as his throne.

We are called to follow a Messiah who promises us, not a facile earthly happiness, but the happiness of heaven, divine beatitude. So we must ask ourselves: what are our true expectations? What are our deepest desires, with which we have come here today to celebrate Palm Sunday and to begin our celebration of Holy Week?

Dear young people, present here today, this, in a particular way, is your Day, wherever the Church is present throughout the world. So I greet you with great affection! May Palm Sunday be a day of decision for you, the decision to say yes to the Lord and to follow him all the way, the decision to make his Passover, his death and resurrection, the very focus of your Christian lives.

It is the decision that leads to true joy, as I reminded you in this year’s World Youth Day Message – “Rejoice in the Lord always” (Phil 4:4). So it was for Saint Clare of Assisi when, on Palm Sunday 800 years ago, inspired by the example of Saint Francis and his first companions, she left her father’s house to consecrate herself totally to the Lord. She was eighteen years old and she had the courage of faith and love to decide for Christ, finding in him true joy and peace.

Dear brothers and sisters, may these days call forth two sentiments in particular: praise, after the example of those who welcomed Jesus into Jerusalem with their “Hosanna!”, and thanksgiving, because in this Holy Week the Lord Jesus will renew the greatest gift we could possibly imagine: he will give us his life, his body and his blood, his love.

But we must respond worthily to so great a gift, that is to say, with the gift of ourselves, our time, our prayer, our entering into a profound communion of love with Christ who suffered, died and rose for us.

The early Church Fathers saw a symbol of all this in the gesture of the people who followed Jesus on his entry into Jerusalem, the gesture of spreading out their coats before the Lord. Before Christ – the Fathers said – we must spread out our lives, ourselves, in an attitude of gratitude and adoration.

As we conclude, let us listen once again to the words of one of these early Fathers, Saint Andrew, Bishop of Crete: “So it is ourselves that we must spread under Christ’s feet, not coats or lifeless branches or shoots of trees, matter which wastes away and delights the eye only for a few brief hours. But we have clothed ourselves with Christ’s grace, or with the whole Christ … so let us spread ourselves like coats under his feet … let us offer not palm branches but the prizes of victory to the conqueror of death. Today let us too give voice with the children to that sacred chant, as we wave the spiritual branches of our soul: ‘Blessed is he who comes in the name of the Lord, the King of Israel’” (PG 97, 994). Amen!