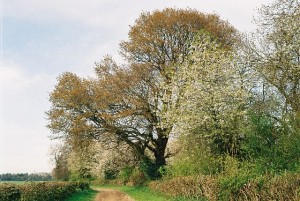 [1]A few days before Easter our clan would gather around the dining room table, cover it with newspapers, and get dirty. Or rather:  colorful. Lots of little fingers got stained purple, pink and green while dipping hard boiled eggs into cups of die.

The more artistically inclined among us would draw crayon designs on their eggs, and the more patient would create multi-colored eggs by balancing an egg on a spoon in one pot of die so that only half the egg was submerged, waiting until that color took hold, and then balancing the same egg on another spoon in another cup of die so that the other half was died a different color (usually with a third bonus color in a band where the other two met in the middle).

When Easter itself finally rolled around, we started out the morning with a dash outside in our PJ’s looking for another Easter egg:  this one drawn in chalk on the sidewalk in front of our house (or on the porch if rain threatened). It was a very special egg, reputed to have been rendered by the very paws of the Easter Bunny himself (which we knew to be Mom and Dad, knowledge that diminished the fun of it not one whit). The chalk drawing was always an egg worthy of Faberge, done in multiple colors, with all manner of cross-hatching, swirls and designs.

But the most important thing to us kids wasn’t the artistic finery:  it was the number in the middle of the egg. That number was, according to family lore, The Mark of the Easter Bunny, drawn to show how many Easter baskets the Bunny had hidden inside the house. Fortunately, we always had a 100% correspondence between the number in the chalk egg and the number of children residing at the premises.

Once we had seen the chalk egg, we had to hurry to get ready for church. We were not allowed to search for our hidden Easter baskets—or eat any candy—until after mass (Mom and Dad were wily that way). Not that the prohibition on searching precluded all indulgences of curiosity.

There is a lot of snooping that can be done without crossing the line into what technically constitutes “searching,” as that term is used in the industry. After all, we kids had to get scrubbed and brushed and resplendent in our dapper new Easter duds, and you can do a lot of moseying around the house while dressing and tending to the requirements of personal hygiene. Hey, the living room is just as good a place to brush your teeth as the bathroom (at least on Easter Sunday it is). And while you’re enjoying a fresh minty toothpaste perambulation, why not take a little look-see behind the big curtains to the front windows?

That’s not searching. It’s just enjoying the view of the wall behind the curtains—you usually don’t get to see that particular patch of wall nearly enough, you know. Oh, and come to think of it, I wonder if I left my shoes inside the kitchen hutch last night? You never can tell. Better check just to be sure.

There was plenty of whispering among the ranks as all this meandering church preparation went on. By surreptitiously sharing information back and forth, between the lot of us we were usually able to identify the hidden locations of all the baskets before the last clip-on tie was put in place and it was time to go. And when we were finally all ready, gussied up and decked out in our new Easter threads (Easter always meant new dresses for the girls and suits for the boys), we headed out to the front steps for the annual Easter photo.

Every year we’d take a picture on the steps in front of our house before going to mass, and it’s funny to see all those pictures together now. It’s almost like a stop-action, time-lapse animation:  all those kids growing taller and taller year after year in picture after picture, right before your eyes. It’s also a good chance to compare changing fashion trends over the past several decades. After careful consideration, I gotta say the Eighties represent the apogee of American style—Magnum PI will always be the King of Cool in my book (not that I’m dating myself or anything).

With the yearly photo complete, we loaded into the van and headed for church. For us kids the highlight of the Easter mass was at the very end, when the priest caterwauled The Great Alleluia. Especially when it was Father Coughlin. He was about 99 years old and thin as a post. The rest of the year he was quiet and almost frail seeming. But come Easter Sunday, stand back! He was a veritable force of nature when he let a Great Alleluia rip—the rafters shook and you knew you were listening to a True Believer.

When we got home after mass, still tingling in our toes from the aftershocks of Father’s Great Alleluia, it was finally time to get those Easter baskets. While us kids scurried about retrieving baskets and commenced the unwrapping of Easter surprises, Mom laid out the feast:  a giant ham dripping glaze and covered with pineapples and cloves, Polish sausage, baked beans with bacon, olives, punch with floating icebergs of sherbet, homemade potato salad, Hawaiian bread, and all the other trimmings.

I always loved the real food of that feast more than the Easter candy—especially Mom’s homemade potato salad. Not that my chocolate bunny was neglected. It was usually de-eared before Mom was done lading the table. But as soon as the food line was open, the earless bunny went back in the basket and I hustled to grab a spot in the queue for deliciousness, eager to pile my plate. But high as I’d pile it, it wasn’t long before I was back in line again for seconds, and then thirds—it was a hobbit kind of feast:  firsts, seconds, thirdsies, in-betweens, etc. And best of all, back in those days I didn’t swoon into a semi-comatose state and head for the couch after that kind of feed. Instead, I went out to play!

As festivities moved outdoors it was time to blow bubbles and launch rockets. Every year we got a collection of Nerf balls, balsa wood gliders, and little red plastic rockets in our Easter baskets. The rockets came with an air pump, and you filled the rocket part way with water, then pumped air into it until the pump couldn’t force anymore air in. With the rocket primed, you moved out to an open space in the yard with no trees overhead, released the lever, and Whoosh! The rocket tore off into the sky like a NASA moon launch, leaving a trail of foaming water streaking through the air behind it. It was thrilling for a 9 year old (and who am I kidding, I still love those things!).

So passed our Easter:  running, launching rockets, blowing bubbles, throwing Nerf balls, and gliding gliders, with periodic breaks to go back inside for more feast, then heading back outside for more play. Spring was in the air, the grass was green, trees were fuzzy with the million little buds of new leaves, and the family was all together.

It was a wonderful day of exuberant living—which is really what Easter is all about. As Scott Hahn explained in Did Not Our Hearts Burn Within Us, his lecture series on the Gospel of Luke, “in the Catholic tradition, we recognize that salvation is not just from sin, salvation is for sharing divine life,” so that we can be “filled with the fullness of Trinitarian life, which is the ultimate goal of salvation.” (Emphasis added.)

Jesus said:  “I came so that they might have life and have it more abundantly.” Jn 10, 10. And, as Father Robert Barron put it, Easter is our “Victory Day,” the day Christ won that new life for us—life in abundance. No wonder Easter brought out Father Coughlin’s electrifying Alleluia. It’s a day for all creatures great and small to thank God and shout out to the heavens:  Alleluia!

[Editor’s note: this article is an excerpt from the author’s e-book Catholic Dad, (Mostly) Funny Stories of Faith, Family and Fatherhood to Encourage and Inspire [2], available for $0.99 on Amazon.]