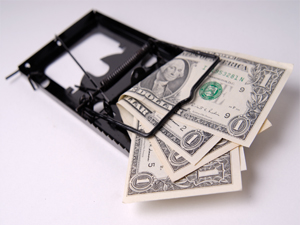 [1]We have often heard the quotation, “We have nothing to fear but fear itself.” The correct quote reads, “The only thing we have to fear is fear itself.” This quote comes from the Inaugural address of Franklin D Roosevelt in 1932. Right after the infamous stock market crash of 1929, which led to the Great Depression. Roosevelt’s first inaugural address outlined in broad terms how he hoped to govern and reminded Americans that the nation’s “common difficulties” concerned “only material things.”

However, as we see from the present, often explosive, debate on how to pay the interest on the national debt, the idea of borrowing to pay bills is not merely about the material, but is also about the moral. From the time Alexander Hamilton paid for the Revolutionary War with a federal debt, the United States only went into debt to pay for its wars. But then in the 1930s, the administration of President Roosevelt attempted to get the nation out of the Great Depression with federal borrowings. Presently, dept represents over 13% of GDP.   Of course, the numbers don’t show the burden of interest payments from government sonsored enterprises like Fannie Mae and Freddie Mac.

To the average American, what does this mean? One of the things I have noticed over my years as a Financial Advisor is the impact interest rates have on the ability to repay debt. People are seduced by the easy availability of money. We have become so accustom to borrowing for things we need now, that we do not look at the long term. Let’s take a Student Loan, for example.

A student needs $10,000 to school. He applies for a Student Loan, and being frugal and diligent, decides to repay his loan on a fixed monthly payment, hence paying $12, 278.26. Should he decide to defer payments until he reaches the end of schooling, he will pay $13,310.18. (Source: http://smartoption.salliemae.com/Results.aspx, based upon $10,000 loan, low rate repayment schedule.)

In addition to that, as students are working to pay additional expenses and/or living expenses after college, here is the protocol of payments. Income: Federal Income Taxes, State Income taxes (where applicable), Social Security Tax (FICA) Medicare Tax, Interest, and, finally, principle. In other words, the student who receives a check for $10,000, can expect to repay in total between $20,000 and $22,000 repayment.

It is not only the students who fall into this trap, many adult Americans fall into the same trap. The Government itself has fallen into the same trap and it will continue to haunt us. FDR was not correct. The only thing to fear is God. In Proverbs 27:7 God’s Word warns us: The rich rule over the poor, and the borrower is servant to the lender.

Dictionary.com gives us this definition of fear: 1. “a distressing emotion aroused by impending danger, evil, pain, etc., whether the threat is real or imagined; the feeling or condition of being afraid. Synonyms: foreboding, apprehension, consternation, dismay, dread, terror, fright, panic, horror, trepidation, qualm.”  That is not the state of emotions God wants His people to live in.

Dictionary.com gives 10 definitions of fear. Only in definition 8 do we find what we are looking for: 8. to have reverential awe of. Synonyms: revere, venerate, honor.

When we obey God’s word and stay out of debt, we live in in definition 8. When we disobey God and go against His word we live in definition 1. You define your living conditions by choices you make. either way, you will live in fear: terrified of what may happen; or rejoicing in awe of the freedom you experience.

There is good fear. There is bad fear.