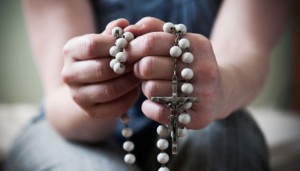 Not long ago, I read an excerpt from a talk given by Fr. Joseph Kentenich, founder of the Schoenstatt Marian Apostolic Movement. In it, he spoke of the iron priest, the silver priest, and the golden priest. The iron priest, Fr. Kentenich says, is one who does his duty as perfectly as possible and nothing more. He simply wants to do his job and live his private life as he sees fit and isn’t really interested in saving souls. The silver priest, however, is concerned with saving souls one hundred percent of the time. This is quite admirable, but his motivation is his own fulfillment rather than the glory of God. In contrast, the golden priest relentlessly cares for souls solely to honor God and save souls. Regardless of the magnitude of the work, he takes it up with love, joy and confidence in Divine Providence.

This measure can be applied to all members of the Holy Catholic Church and not only priests. Therefore, I must ask myself, “What kind of a Catholic am I?”

If I were an iron Catholic, I would follow the precepts of the Church precisely. I would say my prayers, receive the sacraments and basically mind my own business. I would focus on the confines of my own four walls. I would do no harm to my neighbor, nor would I go out of my way to do him any good. At the end of each day, I would be able to say that I did my duty — no more, no less.

As a silver Catholic, I would follow the Church’s precepts, say my prayers, receive the sacraments and constantly seek opportunities to be a Good Samaritan. I would not only help my neighbor, but I would help strangers just for the thrill of being needed. My reward would be knowing that I’m a good person because I went out of my way to do a kind deed.

Now, I must admit that more often than I’d prefer, there are times during which I feel more like I’m made of iron than gold. I feel heavy, awkward, immobile and inflexible. I’d rather stay comfortable in my private enclosure and let the rest of the world go by. I say my prayers and try to avoid sin but without any real enthusiasm. I do what is expected of me according to my vocation but without any extras. My main goal is just to get from one end of the day to the other.

At other times, I feel made not only of silver, but of tarnished silver — hidden under layers of insecurities, imperfections, and helplessness. I seek self-gratification and want only to have others notice my goodness because it makes me feel more important and less apprehensive. I flit around doing superficial acts of kindness because the pats-on-the-back from friends, family, neighbors, and co-workers fills a void. I do something charitable because it’s nice to be needed and helps me find favor with God.

Trying to be a golden Catholic is much more of a challenge. It requires a consistent effort that must override my personal thoughts, feelings, and ambitions (or lack thereof!). The times when my strivings to be a golden Catholic are most fruitful are the times during which my entire being is in true harmony. My prayers become a song of inspiration and a living connection between the Heavenly Father and myself. My every action becomes a desire to please Him rather than a fear of evil. My vocation becomes a prized work of art — a slow, careful process that will create a thing of lasting beauty. At those times, I am totally open to God’s love, which fills me to overflowing so that I simply must share it with all His children. I beg to be His instrument and avail myself to His every wish and whim in all aspects of my life. It seems as though there aren’t enough minutes in the day in which to bask in the satisfaction of doing His work and devoting myself entirely to Him.

During those unfortunate times when I find myself acting as though I’m made of the less-precious metals, I flee to the solace of the Blessed Mother. Whether it be in my parish church, a Marian shrine, my private prayer corner at home or even in the middle of the grocery store, I take a moment to sit quietly and envelope myself in the arms of the Blessed Mother. Forcing myself to be brutally honest, I empty myself completely into her Immaculate Heart. When I’ve poured out every last fault, complaint and misgiving, I offer myself to her and ask her to fill me with the grace necessary to become a golden Catholic. In return, she fills me with her tender Mother-love, consolation, peace, courage and the confidence to try anew. With her beside me, I feel I’m capable of anything the Heavenly Father may ask of me. With her help and guidance, I can become more resolute in my striving. Indeed, she is mediatrix of all graces; she can turn iron into gold.