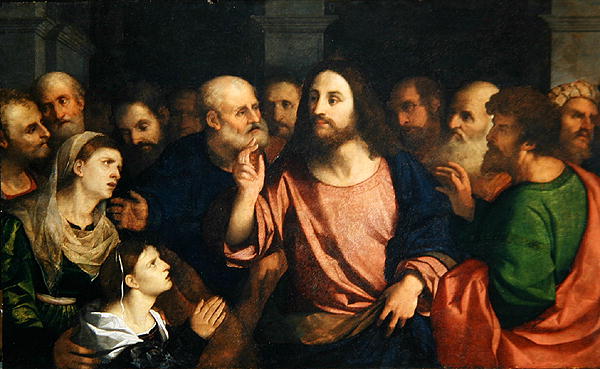 [1]The apostles thought she was a nuisance and asked Jesus to get rid of her.  Jesus had gone to the region of Tyre and Sidon, modern-day Lebanon, and a local woman approached him for a favor.  This was pagan country, home turf of the infamous Jezebel.  The inhabitants of these parts were fondly referred to as “dogs” by their Jewish neighbors, who viewed them as unclean.

Did Jesus too regard these people with disdain?  At first glance it appears so.  She cries out, “Lord, son of David, have pity on me!” and makes him aware that her daughter is troubled by a demon.  He ignores her at first.  Then he rebuffs her.  “My mission is only to the lost sheep of Israel.”  She is undaunted and, as if she did not hear him, insistently cries out: “Help me Lord!”

Then comes what many would take as a put down.  Jesus says: “It is not right to take the food of sons and daughters and throw it to the dogs.”  She could simply have taken offense and walked off in a huff.

But instead she persevered, responding with humility and wit: “Even the dogs eat the leavings that fall from their master’s table.”

Jesus could no longer resist: “Woman, you have great faith, your wish will come to pass.”  And immediately, her daughter was delivered from the power of evil.

Many people think faith is “belief that” . . .   Belief that God exists, or that Jesus is the Messiah.  This woman certainly has this kind of belief.  Though she is not a Jew, she calls Jesus “Son of David,” which means she believes that he is the anointed king of Israel foretold by the prophets.

Yet faith is more than “belief that.”  It is belief in.  To believe in someone is to trust them, to entrust something of value to them, even to entrust one’s very self to them.  Here, the woman entrusts the destiny of her daughter to the man who stands before her.  And desire for her daughter’s salvation propels her to pursue him, to seek him tirelessly until she obtains what she believes he can provide.

Jesus often rebukes his disciples for having little faith.  Their faith is little because it cowers before every obstacle.  This woman’s faith is great because it disregards every obstacle.  He is the King of the Jews.  She is a Gentile.  She asks; he is silent.  She asks two more times, he says no.  She doesn’t care.  She just keeps on coming.

Notice that though she is insistent, she is nonetheless humble.  She does not dispute Jesus’ “preferential option for the Jews.”  She does not arrogantly demand to be served first.  She’ll settle for leftovers.

Jesus had come first for the people of Israel, then for the whole world.  He was only in phase one of his mission.  The time of the Gentiles had not yet come.  But the great faith of this woman appears to have induced him to move forward the timetable.  It reminds me of another woman of faith who moved forward Jesus’ timetable when the wedding guests had no more wine (John 2).  His first response appeared to be a no, but her determined perseverance turned it into a yes that launched his public ministry.