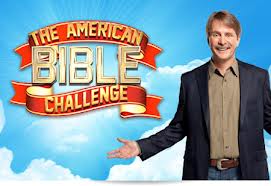 [1]For awhile my teens were fans of Who Wants to be a Millionaire? They loved the fact that the contestant was earning money for charity, the increasing difficulty of the questions, and the drama of the contest. But I didn’t like the questions which had little educational content. So aside from Jeopardy, which they find dull in comparison, we were not watching game shows as a family. Now there is a brand new game show which features the best of both shows and something more: heavenly inspiration. Yes, The American Bible Challenge [2] is a show that highlights Christianity while it challenges your mind.

The American Bible Challenge is billed as a show which “celebrates the Bible’s place in American culture. Comedian and author Jeff Foxworthy hosts as Bible enthusiasts from all across the country compete to raise money for their favorite charities.”

Americans have at least a simple knowledge of the Bible, and are interested in learning more, and long for a show which gives Christianity fair treatment. But the news gets even better; Jeff Foxworthy is a funny and engaging host to this contagiously cheerful show. His homespun humor is the perfect fit for a game show in which three teams who are winning money for their favorite charity answer increasingly difficult questions from both Old and New Testaments. My girls and I were shouting out answers to questions on Noah’s Ark in the beginning, and scratching our heads at the obscure names in the final round on “Women in the Bible”.

The show features an exciting format and set, and a dynamic Gospel choir which opens and closes each segment with old favorites like “Amazing Grace” and “Amen”. Even though some teams earn less, in The American Bible Challenge everyone, including the audience, come out winners!!