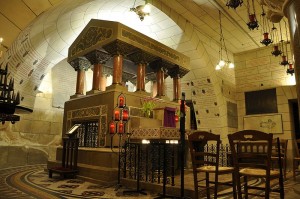 WHEN a mere boy, Martin became a Christian catechumen against his parents’ wish; and at fifteen was therefore seized by his father, a pagan soldier, and enrolled in the army. One winter’s day, when stationed at Amiens, he met a beggar almost naked and frozen with cold. Having no money, he cut his cloak in two and gave him the half. That night he saw Our Lord clothed in the half cloak, and heard Him say to the angels: “Martin, yet a catechumen, hath wrapped Me in this garment.”

This decided him to be baptized, and shortly after he left the army. He succeeded in converting his mother; but, being driven from his home by the Arians, he took shelter with St. Hilary, and founded near Poitiers the first monastery in France. In 372 he was made Bishop of Tours. His flock, though Christian in name, was still pagan in heart. Unarmed and attended only by his monks, Martin destroyed the heathen temples and groves, and completed by his preaching and miracles the conversion of the people, whence he is known as the Apostle of Gaul.

His last eleven years were spent in humble toil to atone for his faults, while God made manifest by miracles the purity of his soul.

Reflection.—It was for Christ crucified that St. Martin worked. Are you working for the same Lord?