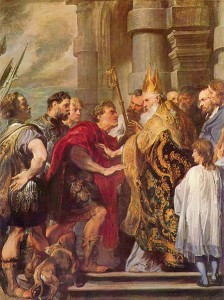 AMBROSE was of a noble family, and was governor of Milan in 374, when a bishop was to be chosen for that great see. As the Arian heretics were many and fierce, he was present to preserve order during the election. Though only a catechumen, it was the will of God that he should himself be chosen by acclamation; and, in spite of his utmost resistance, he was baptized and consecrated.

Ambrose was unwearied in every duty of a pastor, full of sympathy and charity, gentle and condescending in things indifferent, but inflexible in matters of principle. He showed his fearless zeal in braving the anger of the Empress Justina, by resisting and foiling her impious attempt to give one of the churches of Milan to the Arians, and by rebuking and leading to penance the really great Emperor Theodosius, who in a moment of irritation had punished most cruelly a sedition of the inhabitants of Thessalonica. He was the friend and consoler of St. Monica in all her sorrows, and in 387 he had the joy of admitting to the Church her son, St. Augustine. St. Ambrose died in 397, full of years and of honors, and is revered by the Church of and as one of her greatest doctors.

Reflection.—Whence came to St. Ambrose his grandeur of mind, his clearness of insight, his intrepidity in maintaining the faith and discipline of the Church? Whence but from his contempt of the world, from his fearing God alone?