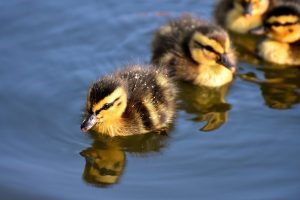 [1]This story happened in our family twenty years ago, but lives on today as a lasting sign of just how powerful our God is.

“Wait until we get home,” his dad, Mark, answered. “We’re almost there. I don’t want a bunch of ducklings flopping around the car.”

This was a day Luke had dreamed of for weeks. Finally, ducks! We had moved out into the country two months earlier. Even though we had dogs, cats, and assorted reptiles and amphibians, our son Luke was impatient for some kind of farm animal. His five brothers and sisters were mildly interested in the ducklings, but not like Luke was. He was the one who had pleaded for them and then built a duck pen with chicken wire on his own.

Luke had begged us for weeks to buy him ducks but it was the grasshoppers that convinced his dad to get them. That summer of 1996 was one of the worst for grasshoppers that anyone could remember. Mark’s first country garden was getting eaten alive by them. They even climbed the trees and ate the leaves.

“Dad, they eat grasshoppers?” Luke had reported to his dad.

“They do?” Mark had asked with sudden interest. That’s when Luke knew his dad would relent.

Luke barely waited until the car was turned off before he jumped outside with his box. He carefully lifted the lid. One by one the ducklings jumped out into a bright August sun. As ducklings usually do, they tried to bunch in a flock. Luke was not content with just watching them. He scooped up the ducklings one by one. As he held them and talked softly, each one relaxed in his hand until he slowly put it down and lifted another. 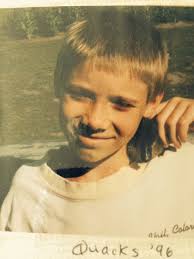 “I’m going to name this one Quacks,” Luke said holding the littlest one. As Quacks calmed down, Luke held him gently against his chest and stroked his fluffy down. With the help of his brothers and sisters, Luke named the other ducklings: McCoy, Kirk, Sunshine, Stripes, Web, Midnight, Donald, Lightning, Captain Picard, Gizmo, and Scrooge.

The remainder of the day was spent with all our kids and neighbors coming in and out of the yard to watch the peeping little flock. Only Luke stayed the entire time, never leaving them except to eat dinner.

As the sun began to set, Luke led his ducklings into the garden for one last snack. When he tried to return the flock to their pen, however, he stepped into the middle and scared them. Quacks ran in the wrong direction while the other ducks went back together.

Luke quickly got the flock into the pen and then ran after Quacks. He saw him go into the garage, behind a big box. “Good, I can get him now,” he thought. When he moved the box, Luke could hear her little peeps, but Quacks was nowhere to be seen. Taking a closer look, Luke gasped. Quacks had fallen down a small pipe. The opening was golf-ball sized. He ran into the house for a flashlight. His heart sank when the light disappeared into darkness down the pipe. Sadly, he walked into the house to find me.

“Mom, something bad has happened,” Luke said. He told me everything. “Is there anything we can do?”

I went with him to the hole. “I can’t think of anything.”

“That’s what I thought,” he said and slowly turned to the house. “And he was my favorite one too–Quacks,” The day which had started with such promise had turned sour. Bedtime was quiet except for the peeps that we could still hear in the house.

Even though there were still eleven ducklings left, the little lost one broke our hearts. Now, we really understood the Bible story of the Good Shepherd. It is a story that Jesus told to explain how much he loves us. He said, “If a man has a hundred sheep and one of them goes astray, will he not leave the ninety-nine in the hills and go in search of the stray?” (Matt.18:12).

Quack’s cries kept up through the night. When I awoke to his peeps early the next morning, I wondered how long it would before he died without food and water. “Food,” I suddenly thought, “That’s it!”

Luke, the first one up, was just coming out of his room. “Luke,” I whispered, “I have an idea. What if you used a piece of fishing line and tied a grasshopper to the end of it? If Quacks is hungry enough, maybe he’ll swallow it and you can pull him up. Then, we can cut the end of the fishing line off.”

“It’s worth a try,” Luke said, hurrying out the door. He returned a short time later.

“Mom, can you pray? Quacks bites the grasshopper but when I pull up the line he falls off.”

Pray for a duck? Luke looked at me hopefully. “Yes, I’ll pray,” I promised.

Luke left to try again, and I thought about praying for the duck. God made animals with feelings. They got cold, scared, lonely, tired and hungry. I sat down in the living room and prayed for God to guide Quacks up out of the hole.

In minutes Luke returned. His smile stretched ear to ear as he snuggled up to the little duckling cupped under his chin–Quacks! “He bit the grasshopper and I was able to pull him all the way up,” Luke said happily. When I grabbed him, he just let the grasshopper drop out of his mouth.” Amazing!

By now the other kids were coming downstairs for breakfast. I told everyone what had just happened. “Didn’t you all think it was impossible that we’d ever see Quacks again?” I asked.

The kids looked at me, surprised. “I knew God could do anything, so I prayed to Him last night to save Quacks,” seven-year-old Tyler said. “That’s what I did too,” agreed Luke.

Now, I was amazed. Even though it seemed impossible to get Quacks out of that deep hole, they knew that with God, nothing is impossible.