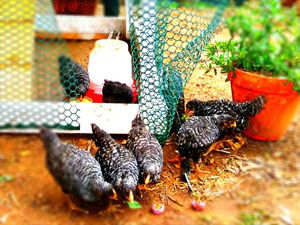 [1]When I look out my kitchen window, I see seven girls dressed in plain black and white with just a touch of red on their bonnets. They chatter all day long and love to sunbathe. They pick at each other, they eat non-stop and don’t gain weight.

These girls are industrious if querulous farmhands. They have a lot of fun but they mostly study on the subject at hand, which is agriculture in this case. I like that in a teenager — focus. But these doyennes of my yard-stead are black and white American Dominique chickens. With rose-red combs and wattles. And they are intent on one thing only, making our breakfast every morning and giving us darling little nitrogen packages, otherwise known as “poo” that makes our vegetables and small fruits grow like a well-tended Amish garden!

I don’t understand why so many people fear the chicken. They should fear the eggs and chickens in the grocery story. Not my cute, personable girls.

The Amish are known for their self-sufficiency, just as Thomas Jefferson’s America used to be known — a nation of farmers who grew most of their own food. These yeoman farmers would have never engaged in the risky financial games many Americans have played with their homes in recent years. The Amish, like our farming ancestors, know and knew what is real; they continue to grow their own food and wisely conserve their land and resources.

I regard my home in a different way than I have in the past. Real estate investment potential and borrowing power not-withstanding, I view the soil around me as my ancestors used to regard theirs: it is possible in a very small space to produce a great deal of organic food to feed my family at a very low cost. We get a lot of sunshine, exercise, and laughs in the deal as well. Anyone can do this whether in a regular-sized yard, a sunny apartment deck or an acre.

Back to my Amish teenagers. My husband gave them to me last spring when they were just six weeks old as an early birthday present. They will be a year old in May, so in chicken years, they are teenagers this blustery winter. And they are weathering the snow in the South just fine because they are a hearty, American heritage breed. Through many vicissitudes including trouble with zoning and having to move them several times, I have held on to Isadora, Rosebud, Blanche, Sophia, Marie Antoinette (she used to be named Madelaine but that is another story), Pearl, and Ruby, because they are the thin edge of a wedge. 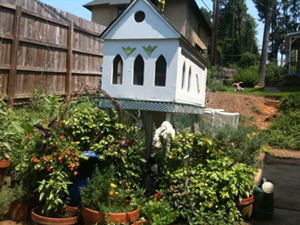 What is this thin edge of the wedge where my seven Amish teenagers sport playfully in the fresh air and sunshine all day? You may also imagine, if you are so culinarily inclined, this as a wedge of a delicious leek and bacon quiche made with orange-yolked eggs courtesy of my modest, twittering teens. My feathered friends represent to me the cutting edge of my efforts to create a permaculture of life – chickens, bees, vegetables and small fruits such as blueberries, strawberries, jujube, and blackberry that together with my freshly ground wheat and bread form a healthy, organic, and low cost diet for my loved ones.

The problem most Americans will come up against with their yard-stead is outdated zoning laws that need to be challenged and changed like the state of Georgia did with the recent passage of their “Right to Grow” law. During the debate process, it became crystal clear that this is an issue Democrats and Republicans can unite on because it is an issue that goes beyond ideology or farm policy or globalization. It is the basic human right to feed oneself and those who rely on us.

My Revolutionary War ancestors would be appalled by a country that won’t let citizens take care of themselves with a few chickens in the backyard. They rumbled over tea. I am fighting for eggs.

You would think I was cooking up meth, not eggs Benedict.

In these hard economic times, some people need to get real. Otherwise, “let them eat grass!” I know my chickens do and that is why my eggs are so rich in Omega 3 and are a fabulous source of nutrient-dense protein. I can turn my back on the teas I savor, but this scratch-cook really can not do without eggs.

Like a rising tide across this country and many parts of the globe, others like me seek to be increasing independent of what is found in our grocery stores — those anemic, genetically modified products of a sick industrialized food chain, a far-flung system that will increasing cost more money and that is already making many Americans fat and disease-riddled. It is a broken system that can all be interrupted by bad crops here in America and globally (something we already face), by high oil prices and distribution disruptions such as riots, and Chinese creditors calling in loans. Pass the apple pie but please to remember that most of them come across the Pacific from China. 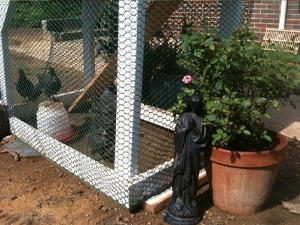 I wrote a version of this article before the Tunisian fruit vendor set himself on fire a few weeks ago, igniting a firestorm of frustration that made its way to the land of the Pharaohs. I set it aside and went about my other business but watched our brothers in the cradle of Western Civilization as much as I could, transfixed like the rest of the world. I cried when I saw those women putting those ancient cobblestones back in place with their bare hands after this first phase of their revolution. And now the revolution has spread to other Middle Eastern nations. Something is happening in Wisconsin and I am betting it will spread.

The historical study of revolutions is a highly evolved sport. It is not a playpen for the faint of heart because ideology — right and left — rewrites history at least twice every century. There is no such thing as objectivity whether you are studying the grandmere of all revolutions, France’s first, which began in 1789 or the Russian revolution of 1918 or any of the Latin American revolutions. I do know that what I learned in graduate school 25 years ago, I have come to see in a vastly different way since I have learned about some, other crucial viewpoints on these events.

Never mind ideology, I do know this: that mothers and fathers everywhere and in every age want to feed their children. On this all of us can agree. I know farmers, and master gardeners, and county extension agents, and regular folks with backyard urban chickens just like me who would love to give that Tunisian widow some fresh eggs or our lettuce and tomato seeds or our beautiful high country grain for whole wheat bread.

But we can’t. We can’t even have backyard chickens in most of the municipalities in this country. Americans want to feed themselves too, and somehow, this city girl turned urban farmer wants to shout “feed the people, and ask questions later!” 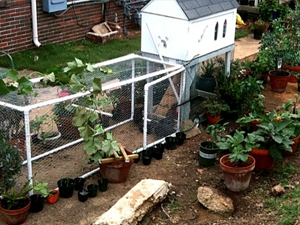 Because we are all at that point. Not just our Middle Eastern or our Latin American neighbors or the lovely Mexican family next door to me whose four-year old Fernando helps me gather eggs while we learn each other’s language during our multi-generational 4-H club meetings.

I am glad that our first Lady is growing food on the White House lawn. It is the people’s house. It is a good use of all that grass. I think I will ask her if she will ask her husband to pardon my chickens.

They pardon turkeys at the White House. Do they pardon chickens? What is the fax number?

Viva la food revolution! Would you like some devilled eggs?