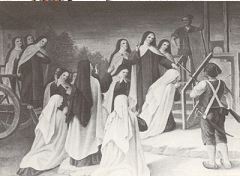 [1]During the period between 1789 and 1799, France was deep in the throes of revolution with forces of change advocating for democratic reforms. With the downfall of the monarchy in 1792, the Committee of Public Safety became the governing body. From September 1793 – July 1794, France lived in the period famously known as The Reign of Terror when thousands of suspected enemies of the state were guillotined.

The French Revolution took place during the Age of Enlightenment, a time of great developments in politics, society, philosophy and science. It was the beginning of the modern western world and the end of traditional social order, including the reign of the French monarchy and the authority of the Catholic Church. The rights of man prevailed over obedience to the Church and religious orders were thought to be “the most scandalous violation” of these rights. While active religious orders were tolerated because they provided education and medical care, contemplative orders were considered to be “absurd”. By 1792, religious houses were closed and their members scattered. Meeting for common prayer and wearing religious clothing were forbidden.

The Carmelite Sisters of the Carmel of Compiegne, including the Prioress, Sr. Teresa of St. Augustine and fifteen companions were ordered to leave their Carmel on September 14, 1792 – the Feast of the Exaltation of the Holy Cross. Shortly before their eviction, Sr. Teresa of St. Augustine led the Sisters into making a communal act of consecration offering their lives for the sake of peace in France. Outside of the convent, the women lived in groups of four and wore the garb of simple French women. They continued to live by the rules of the Carmel, meeting for common prayer and seeking solace in the Sacred Heart.

Within an atmosphere of fervent anti-Catholic sentiment during the Reign of Terror, it was only a matter of time before the Sisters were arrested. In mid-June 1794, they were charged with conspiracy, treason, being royalists and corresponding with anti-revolutionaries. At their trial, they were not allowed any lawyers or witnesses. Evidence against them included pictures of the King and various images of the Sacred Heart that were found in the convent. Other incriminating evidence included a hymn, Canticle to the Sacred Heart, that included the desire that the “King will be free”. The hymn didn’t specify the identity of the King but it provided enough proof. To the list of charges, Mother Henriette of Jesus, the novice mistress and former prioress, succeeded in her demands to include “attachment to your religion and the King”. She then proudly declared to her Sisters: “We must rejoice and give thanks to God for we die for our religion, our faith, and for being members of the Holy Roman Catholic Church.”

On July 17, 1794, the Carmelite Sisters, dressed in their religious habits in defiance of the order to wear plain dress, were led through the streets of Paris in a tumbrel, the open cart for transporting prisoners to the guillotine. At the Place du Trone Renverse, they were taken off the cart. Sr. Charlotte of the Resurrection, a seventy-eight year old invalid, was cruelly thrown to the ground from the tumbrel.  Witnesses heard her forgive her tormentor and offer words of encouragement and prayer for him. Although she had an “extreme horror” of the guillotine, Sr. Julie declared: “We are victims of the age, and we must sacrifice ourselves for its reconciliation with God.” Strengthened by their intense devotion to the Sacred Heart, witnesses observed that they “looked like they were going to their weddings.”

The crowds that usually gathered at executions were rowdy, often hurling insults and mocking the criminal; however, at the sight of the sixteen Sisters, the crowd watched in stunned silence. Not a sound came from the mob of onlookers.

A letter written by Reverend Mother Emilienne, Superior General of the sisters of Charite of Nevers, describes what happened next: “I learned from a person who was a witness to their martyrdom that the youngest of these good Carmelites was called first and that she went to kneel before her venerable Superior, asked her blessing and permission to die. She then mounted the scaffold singing Laudate Dominum omnes gentes. She then went to place herself beneath the blade without allowing the executioner to touch her. All the others did the same. The Venerable Mother was the last sacrificed. During the whole time, there was not a single drum-roll; but there reigned a profound silence.” Each of the Sisters kissed a tiny statue of the Madonna and Child that was held by Mother Superior. As each Sister went to her martyrdom, their chorus of voices dwindled until Mother Teresa of St. Augustine, the last to die, was left alone to continue the hymn.

On July 27, 1794, just ten days after the Sisters’ execution, the most notorious member of the ruling party, Maximilien de Robespierre, was executed by guillotine and the provisional government fell. The self-sacrifice of the Martyrs, sustained by their devotion to the Sacred Heart of Jesus in reparation and atonement for the sins of all, finally ended the Reign of Terror.

The Carmelite order has its beginnings in a community of hermits who lived near the “fount of Elijah on the slopes of Mount Carmel” and thus trace their origin to the prophet Elijah. It is said that the Sisters of the Carmel of Compiegne were prophets, not because they could foresee the future but because by their self-sacrifice, they called the people to return to their faith. That is the definition of a prophet in the Old Testament – someone who turns the people back to “their former fidelity”.

In 1902, Pope Leo XIII declared the martyrs venerable. After several miracles were confirmed, Pope St. Pius X beatified them on May 27, 1906. The cause for their canonization remains open.

The story of the martyrs has inspired literature and music throughout the ages. Gertrud von le Fort wrote the German novella, Die Letzte am Schafott (The Last on the Scaffold). This became the inspiration for Georges Bernanos’ Le Dialogue des Carmélites (The Dialogue of the Carmelites) which in turn inspired François Poulenc’s opera of the same name.  St. Teresa Benedicta of the Cross (Edith Stein) wrote about their act of consecration and martyrdom.

July 17, 2013 marks the 219th anniversary of the martyrs’ ultimate self-sacrifice of faith and their courageous example remains relevant today. In a world that is increasingly hostile to a Christian way of life, the call to martyrdom will intensify. Violence and persecution towards Christians in the Middle East and elsewhere, the threat to religious freedom  and the pervasive mentality of relativism pose many challenges to the person seeking to live an authentically Christian life. As secularism and anti-Christian sentiment flourish, we seek to emulate role models who demonstrate how we ought to live in the face of adversity. The Martyrs of Compiegne show us that virtue cannot be taken from us and like the Sisters, the right way to live and to die as a follower of Christ is to live in the spirit of abandonment as we sing to His glory until our earthly life is ended.

Martyrs of Compiegne, pray for us.

Bunson, M.E. (ND). They Sang All the Way to the Guillotine. Retrieved from http://www.catholic.com/magazine/articles/they-sang-all-the-way-to-the-guillotine

Newkirk, T. (ND). The Mantle of Elijah: The Martyrs of Compiegne as Prophets of The Modern Age. Washington, DC: ICS Publications.