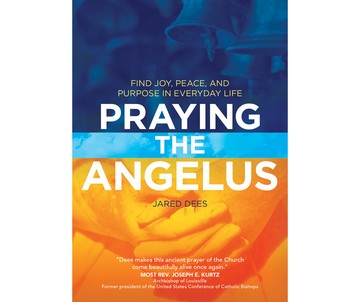 My knowledge of the Angelus prayer was minimal at best before reading Praying the Angelus by Jared Dees (Ave Maria Press, 2017). I doubt that I am alone in that regard. Dees, a high school theology teacher, describes his own confusion when first listening to the Angelus in Latin when in Rome and then learning about the prayer from a priest in his parish who was guest teaching in his religious education program.

This was the start of a transformative personal journey for the author in which he would begin incorporating the prayer, offered at six a.m., noon, and six p.m. each day, into his daily routine. The fruits of that experience led him to want to share this beautiful devotion with others.

The Angelus is a prayer in honor of Our Blessed Mother and the moment of the Incarnation. According to Dees, it “originated in the Middle Ages as a devotional practice for laypeople living near the great monasteries of Europe to help them follow the prayer example of those who lived monastic lives.” During Easter, the Regina Caeli is prayed in place of the Angelus “as a prayer of praise to God for the Resurrection.”

Dees shares the history of both of these prayers as well as provides a line by line explanation and reflection for each line of the prayers.

Whether or not one ultimately chooses to incorporate the Angelus into one’s daily devotions, Dees’ discussion of the value of repetitive prayer is worth reading and pondering. Being committed to a structured daily prayer practice which requires you to interrupt your day with prayer at regularly scheduled intervals has the power to transform your life. He also makes some important observations about the value of devotions in passing the Catholic faith down to our children.