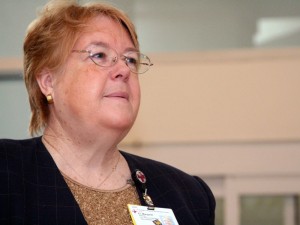 [1]An Arizona hospital that lost its Catholic affiliation by procuring a direct abortion two years ago says that the nun responsible for the decision to do the abortion has regained good standing with the Catholic Church. The local diocese did not confirm the statement, calling the issue a personal one.

Bishop Thomas Olmsted of Phoenix had stated that Mercy Sister Margaret McBride had excommunicated herself by supporting the direct abortion of an 11-week-old unborn child in her role on the ethics panel at the St. Joseph’s Hospital and Medical Center in 2009. The U.S. Conference of Catholic Bishops later issued a statement  [2]that backed Olmsted’s reaction to the abortion.

CNS News reported Friday that, in response to an inquiry into McBride’s status, the hospital issued a statement that she has since “met the requirements for reinstatement with the church and she is no longer excommunicated. She continues to be a member in good standing with the Sisters of Mercy and is a valued member of the St. Joseph’s executive team.” The hospital remains out of affiliation with the Catholic Church.

While receiving an award from Call to Action for her role in the abortion last month, McBride stated that she “did reconcile to the Church” and had completed “what the bishop wanted me to do.” In the same speech, McBride exhorted members of the dissident group to “move forward in this very disappointing time in our church.”

“It is only by our example that our Church will change. For us to expect that the hierarchy of the Church is going to magically change, I think it’s just not going to happen,” said McBride to laughter.

Diocesan spokesman Rob DeFrancesco couldn’t confirm to LifeSiteNews.com whether the excommunication had been lifted, saying that the issue was a personal one between Sr. McBride and the Church. He also did not say whether McBride recanted her support for the abortion.

“[The excommunication] wasn’t made public through the bishop’s office to begin with, and I don’t believe that what is required to be back in communion with the Church, what the steps were, I don’t know that that was made public either,” said DeFrancesco.

In May 2010, Bishop Olmsted said the direct killing of the unborn child as a form of therapy for its mother’s pulmonary hypertension was seriously out of keeping with Church medical ethics.

“An unborn child is not a disease. While medical professionals should certainly try to save a pregnant mother’s life, the means by which they do it can never be by directly killing her unborn child. The end does not justify the means,” said the bishop at the time.