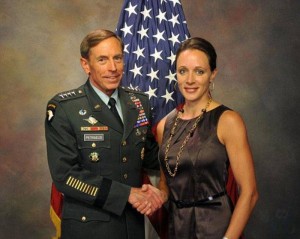 In a scandalous story with more twists and turns than the road to Hana, we see a married CIA director who resigned after an affair with his Harvard-educated biographer, discovered because of her harassing emails targeting a doctor’s wife who was the CIA director’s “close friend,” read by an FBI agent who emailed shirtless pictures of himself that were uncovered in an investigation of “inappropriate communications” between a Marine General and the doctor’s wife, whose twin sister used personal recommendations from the CIA Director and the Marine in a contentious custody battle.

Will we learn the truth in next week’s episode? Has the ex-CIA director told everything to Congress? Did the FBI agent attach the wrong photograph? Will the doctor retire over Obamacare? Is one sister really the evil twin?

This story, fit only for daytime television, is the obsession of the mainstream media and 12,000+ online news reports. The Petraeus affair raises legitimate concerns of national security and moral integrity, but please spare us the salacious details. Petraeus’s resignation as CIA Director was purposely delayed until after the presidential election, although the affair was under investigation for months. Attorney General Holder defended the delay, which also temporarily stalled the congressional investigation into the Benghazi fiasco.

Petraeus has now testified that Benghazi suffered from terrorist attacks, not a spontaneous demonstration over a YouTube video (that few had even watched). Rep. Peter King reportedly stated that Petraeus’s testimony on Libya changed since September.

Infidelity raises questions of honesty in other areas. If a man lies to his wife, will he tell the truth, the whole truth, and nothing but the truth to others? Or would he lie to his superiors, to the American people, and to Congress? Would Petraeus betray us? That is the relevant question.

While we await the outcome of the Benghazi investigation and watch the sad demise of another career, recognize that temptation lurks where we least expect it. As Confucius said: “When we see men of a contrary character, we should turn inwards and examine ourselves.”

So, what are the practical personal lessons from Petraeus and Broadwell? How can the average Joe (and Jane) flee temptation?

Strategies that work for losing weight or giving up cigarettes work in other situations. Consider these tips for fidelity and career longevity:

Never let your guard down. If a coworker, a friend’s spouse, or your biographer becomes too appealing, take evasive action! Even change jobs to stay safe.

Recognize the danger signs: If you start spending more time with someone or take extra care of your appearance when they are near, this is a problem. If you become attracted to someone who is off-limits, get out of the danger zone. Don’t walk, RUN!

Flirting is not a sport for married folks – unless you flirt with your own spouse. No affair has ever “just happened.” Infidelity comes from a series of minor indiscretions and little steps in the wrong direction. Finally, if you are stupid enough to tweet, text, or email threats or revealing photos, no advice will stick, so you are on your own.

These lessons are obviously ignored by campaign schools, military briefings, and Ivy League curriculum. For this reason – and many more – we haven’t seen the last Clintonesque scandal. Unfortunately infidelity, like abortion, is neither safe nor rare in America. And affairs, like elections, have consequences.