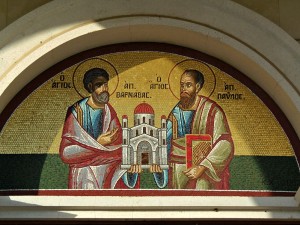 His name was Saul. In his young and undiscovered days, before he became Paul the Apostle, he worked as lead prosecutor for the Sanhedrin, the Jewish Supreme Court in Jerusalem.

In those days Saul was eager to make a name for himself, to kill or to die to obtain notoriety. “Someday,” he thought, “I’m going to be somebody important. Someday the entire world will know my name.”

The Christians at Jerusalem feared the name of Saul of Tarsus because he persecuted the Church and tried to destroy it.

Saul’s conversion on the road to Damascus is one of the most famous stories in the New and Eternal Covenant. What happened to Saul immediately after he met Jesus remains a mystery, but I’d like to shed some light on it.

In his letter to the Galatians he writes: “When God, who from my mother’s womb set me apart and called me through his grace, was pleased to reveal his Son to me … I did not immediately consult flesh and blood, nor did I go up to Jerusalem to those who were apostles before me; rather, I went into Arabia, and then returned to Damascus” (Gal 1:15-17).

Saul earned his keep. He paid his dues. In Arabia he dug deep into the Scriptures. To Arabia, yes, but to what part? We’re talking more than a million square miles of desert.

Saul was like the Israelites, John the Baptist, the prophet Elijah, even the Lord: all needed proving in the desert before they began their ministry. This is a common biblical template for the one who is called by God to preach the gospel.

Daily life can mimic the desert experience. All our days pass away into the glory of God. We are challenged to fulfill our calling: evangelization. You. Me. Them. Everybody.

Returning to Damascus, Saul, Greek bible in hand, preached Christ crucified and risen, that he was the Son of God. He spoke of Jesus with the entirety of his being.

He totally blew the minds of everyone in the synagogues. “What’s he talking about? Isn’t this the man who in Jerusalem killed Christians?” And all who heard him were astonished.

But none so much as young Saul. Dig the change in the man. That’s life in the Spirit: we never know what we’re capable of until we take a risk and speak openly about the truths of the faith in our hearts.

The Book of Ecclesiastes says there is a time to speak and a time to be silent. Saul rose to the occasion, higher than he could have imagined. Now he was thinking, “Someday the entire world is going to know the sound of my voice and then they’ll know how much I’ve suffered for the sake of the Name.”

The Jews from the synagogues and the governor of the city wanted him dead. His fists got hard and his wits grew keen.

Then God said, “My grace is sufficient for you, for my power is made perfect in weakness.” Move forward, take action, leave the results to me.

Escaping from Damascus wasn’t easy. The officials tried to seize Saul but his disciples lowered him over the wall in a basket. He tumbled onto the ground and ran as fast as he could beneath a hail of arrows.

He got on that hot road again and traveled to Church headquarters. His arrival was ill-timed. Many suffered horribly because of the reign of terror he once led.

The Christians referred to him as the “Satan’s apostle.” Once he relished that title. It bore imprimatur. Now he snuck into Jerusalem with his tail tucked between his legs. All he wanted was a hot meal, a warm bed, and a friend.

No longer was he Satan’s apostle but would present himself to the disciples as an Ambassador for Christ.

But he lacked polish, nuance, gravitas. With his bull-in-the china-shop mentality the future apostle blundered into the city expecting to be received like King David dancing before the Ark of the Covenant, or, like Christ on the back of a donkey on Palm Sunday.

Yet he wasn’t so finger-licking uncouth that he couldn’t think this situation through. Rather than show up at Peter’s doorstep he sought assistance from an old friend—Barnabas.

A generous man with a commanding presence, Barnabas, whose name means “son of encouragement,” took Saul aside, drew the entire story of his conversion from him and decided that it rang true.

Thus began the partnership of the greatest missionary team in the history of our Church.

What a difference a friend can make.

If Barnabas hadn’t trusted Saul there would have been no Paul the Apostle. Barnabas introduced him to James and Peter. He reported to them that Saul had seen the Lord and that he preached in the synagogues at Damascus.

This was a pivotal moment in our faith: love, tolerance, and mercy replaced fear, loathing, hostility, and indignation. The Apostles counted Saul among them. For now.

This portion of the story sort of has a happy ending. What happened? Saul met the same opposition that stonewalled him in Damascus. His abrasive personality got him in Dutch with the Greeks. Sincerity was one of his greatest qualities. Restraint, not so much.

Alas, in a matter of days he infected the city with the dread of his presence and infuriated members of the synagogues who plotted to kill him.

The malaise reached a fever pitch and forced the brothers to send Saul packing to his hometown of Tarsus, five hundred miles across the Great Sea and up the icy Cydnus River.

They gave Saul a time out.

His conscience was clear. He boarded the ship. He left the community in a better place than the day he arrived.

The moral of this story is that we never know how or when God is going to use us for service of the gospel. Or who he will put in our lives to help us accomplish the works of God.

The great Saint Paul didn’t become a saint overnight but he overcame many challenges because he believed in the vocation to which God called him.

“The church throughout all Judea, Galilee, and Samaria was at peace. It was being built up and walked in fear of the Lord and with the consolation of the Spirit grew in numbers” (Acts 9:31).

Saint Luke emphasizes the peace and the consolation conferred on God’s church by the Holy Spirit and that no human power can destroy her.

Not even one like young Saul, with his grace, style, impetuousness, and deep, heartfelt sincerity.

Dig the change in the man. Saul became important. Read his letters. Listen to the sound of his voice.