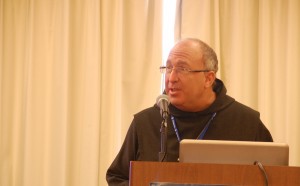 As news of the untimely death of Brother Paul O’Donnell [2] spreads, there will be many remembrances by those who knew him well. Perhaps none more than Bobby Schindler, brother of Terri Schiavo. Brother Paul distinguished himself, and the Church, by being the constant companion and supporter of the Schindler family as their severely brain damaged daughter, Terri, was relentlessly hounded to her death by starvation and dehydration by her husband, Michael, whose promises of therapy for his bride changed over time.

As Michael convinced the courts that Terri didn’t want to live as she was, her family begged for custody of her if her husband didn’t want the responsibility for her care. It was a landmark case in the United States, and the family spokesman was their humble, gentle friend, Brother Paul (pictured here [3] in a New York Times photo from the story of eleventh hour appeals [4] in the seventh day of her dehydration and starving). The photo tells the story of the man’s life.

Emmanuel: God with us.

We are often presented with situations, albeit far less dramatic, where we are called to be Emmanuel. The Last Judgement in Matthew 25, and the Acceptable Fast in Isaiah 58 connect the same ethos in Old and New Testament. It all boils down to, in two words,

When the bottom falls out of people’s lives, we are called to be there. Pro-life is far more than being anti-abortion, and Br. Paul showed us pro-life activism, Gospel activism on the other end of the life spectrum. Our maternity homes and pregnancy centers demonstrate the commitment to life at both the beginning and the middle of the spectrum, by providing all of those things mentioned in Isaiah 58 and Matthew 25:

In the late 1980’s, then-Mayor Ed Koch of New York City addressed the homeless epidemic by declaring that homelessness would vanish if every church, synagogue and mosque in America adopted two homeless families and mentored them to wholeness. He was right.

Brother Paul leaves for us a simple challenge. When a photo is taken of those around us in their time of need, real need, will we be in it? When the crisis has passed, will we have been there? Will people see our own passing from this world and say of us, “Emmanuel?”

Brother Paul was there when being there counted the most. He was fearless and indefatigable, all the way to the end of Terri’s life, and then with the family until the end of his own.