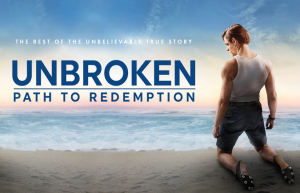 [1]When World War II ended, Louis Zamperini, a former Olympian runner and war hero, was ready for peace. But soon, he fell captive to another more personal war. Memories from his ruthless treatment in a Japanese prisoner of war camp would not
release him.

The story was told in 2014 in Unbroken, but that movie only hinted in the end at the best part: Jesus’ saving grace. The sequel Unbroken: Path to Redemption picks up where the first movie left off and leads us to the night in 1949 at a Billy Graham Crusade. It is there where Zamperini found the faith and determination to overcome alcoholism, repair his marriage and forgive the very men responsible for his personal torment.

Both screenplays were based on Laura Hillenbrand’s bestselling book, UNBROKEN: PATH TO REDEMPTION which spent four years on The New York Times best-seller list; 15 weeks in hardcover and 20 weeks at #1 in paperback.

Post war, Zamperini walks into a life of great promise: marriage to the beautiful Cynthia Applewhite, fatherhood, and the goal of running in the Olympics again. But the past is never far behind. Zamperini’s torture and survival after being lost at sea for 47 days and in prison camps for two years, become his present in the form of flashbacks and nightmares of cruel beatings from notorious camp commander Mutsuhiro Watanabe, known as “The Bird”; The grip these painful memories has on him threatens to destroy
his future.

In the 1940s, Post Traumatic Stress Disorder (PTSD) was widely experienced but not widely understood, so Zamperini had little to fall back on. We become a witness to a train wreck—so much to live for being thrown away. A spouse can only handle so much too, so at what point should Cynthia say enough is enough?

Telling a person dragged down by suffering to turn to Christ can sound hollow. And so it was with Zamperini. The joy of Christianity can seem make-believe to one who feels forgotten by God. Watching the pain unfold and the path to redemption is a story for everyone given that life can put us on either end of this scenario—one suffering or one trying to help another. It is a real-life testimony to what faith can do and also to the fact that it’s not necessarily easy to get someone to that point.

Here are some other interesting notes about the movie.