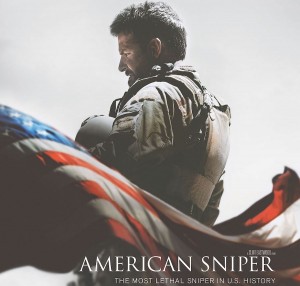 [1]Does American Sniper glorify war? Does the film pretend to take very seriously the colossal cost of war, the human toll on both sides, the fact that “war is an adventure from which there is no return” (John Paul II)–but actually delights in it? Kinda, sorta. Even though Clint Eastwood insists he’s more of a dove than a hawk.

First of all, 84-year-old Eastwood is one heck of a director: short and medium juxtaposed scenes one after the other. Nothing wasted. Cutting in deep and leaving early (that’s how you shoot a scene). USA/Iraq. USA/Iraq. Towards the end of the film, you’re just like, “Wow, I’m really here in the middle of this firefight in the middle of this sandstorm.”

Jason Hall is an amazing writer: no false words, false notes, false emotions, false dialogues. Hall is an actor. If actors can write, they make the best writers. He is nominated for an Oscar.

A transformed, rugged and plain Bradley Cooper–although a solid actor–is surprisingly emotionless, unexpressive and stoic throughout, but maybe he was trying to channel Chris Kyle, the real soldier he plays. Maybe it was a stretch for Cooper to play this “God, country and family” Texan, who was so focused in every way and had so few doubts about his trajectory in life, his identity and mission that he was able to hold it together better than most soldiers.

Likeable, not-stuck-on-himself, unassuming, not-self-absorbed Cooper shines most when he is being a charming woo-er and then husband, or joking with the guys in that “hopeful or die” (not gallows humor) way American soldiers evidently do. Eastwood or Hall deserve an Oscar, but not Cooper, not for this role.

Chris’ then-girlfriend (a smart performance by Sienna Miller–a Brit who made me believe she was a Yank) asks the karmic question: “Do you ever think of the person at the other end of your gun?” Yes, he does. He refuses to take killing lightly as some of his buddies seemingly do.

At one point a soldier wavers: “I want to believe in what we’re doing.” And that’s really the question with so many wars and military actions, isn’t it? What did Iraq have to do with 9/11? Did we really go in there after WMD’s (weapons of mass destruction) that some are now reporting do exist (Bush was right?) and are now in the hands of ISIS? (Afghanistan was going after Bin Laden and terrorist camps, I can comprehend that.)

I found myself getting angry at the hell we brought on beautiful Iraq, watching simulated sequences of hapless civilians getting murdered as “collateral,” or because they helped the Americans, or whatever. And in war zones, there’s always the demonic unleashed in myriad other little and big ways. Yet, I’m firmly convinced that the majority of our soldiers who went to Iraq did so with the right intention (to protect country, freedom, because they were sent, as a reaction to 9/11).

It’s interesting how the basic training and drill sergeants for the all-male Navy Seals that Chris was a part of use sexual terms, sexual belittling, etc., to toughen the guys up. But it’s also so very tongue-in-cheek and everyone knows it.

The talk is rough throughout the film, and the violence is quite intense. Sex and gore shots are fleeting. The soldiers alternately dismiss and demean women, as well as live for them.

I have a priest friend who sincerely thinks that war is good for men. That going to war is the best and most noble and “manly” thing a man can do. Can we not offer men something higher than war to dedicate themselves to?