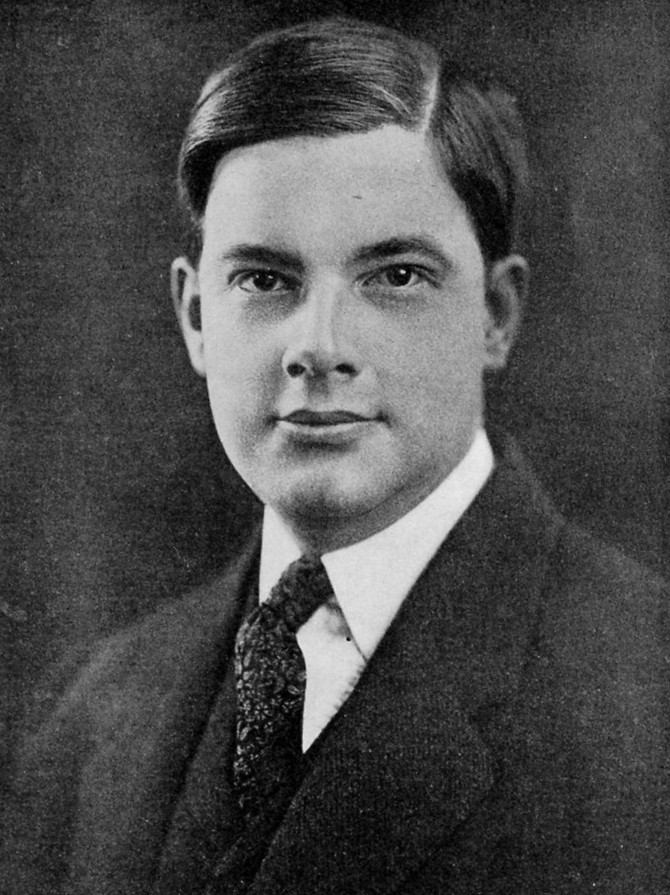 Poet Joyce Kilmer [2] was killed in action in France, July 30, 1918, during the Second Battle of the Marne [3], aged 31, and was posthumously awarded the Croix de guerre [4] by the French Republic.

He had been born in New Brunswick, New Jersey, Dec. 6, 1886; he was graduated from Columbia University in 1908; he married fellow-poet Aline Murray shortly after his graduation; they both joined the Catholic Church in 1913; and, they had five children together, one of whom died in childhood.

Joyce Kilmer was an influential editor and popular lecturer, and was probably the most prominent literary Catholic in the country, when he volunteered for military service just a few days after the United States entered the Great War [5], in 1917.

At the time of his death, Kilmer was one of the best known American poets, due almost entirely to the fame of his little poem “Trees” [6], written and published in 1913:

I think that I shall never see
A poem lovely as a tree.

A tree whose hungry mouth is prest
Against the earth’s sweet flowing breast;

A tree that looks at God all day,
And lifts her leafy arms to pray;

A tree that may in Summer wear
A nest of robins in her hair;

Upon whose bosom snow has lain;
Who intimately lives with rain.

Poems are made by fools like me,
But only God can make a tree.

The poem was set to music [7] by Oscar Rasbach [8] in 1922, and was recorded by many popular artists for decades thereafter (including the doo-wop group The Spaniels [9]).

We can gather something of Kilmer’s patriotism, and perhaps his motivation for signing up so soon during the war, from his poem “Memorial Day” [10]:

The bugle echoes shrill and sweet,
But not of war it sings to-day.
The road is rhythmic with the feet
Of men-at-arms who come to pray.

The roses blossom white and red
On tombs where weary soldiers lie;
Flags wave above the honored dead
And martial music cleaves the sky.

Above their wreath-strewn graves we kneel,
They kept the faith and fought the fight.
Through flying lead and crimson steel
They plunged for Freedom and the Right.

May we, their grateful children, learn
Their strength, who lie beneath this sod,
Who went through fire and death to earn
At last the accolade of God.

In shining rank on rank arrayed
They march, the legions of the Lord;
He is their Captain unafraid,
The Prince of Peace . . . Who brought a sword.

As a soldier in “The Fighting 69th” Infantry Regiment [11], Kilmer was soon promoted to sergeant, but he declined further promotions. He wrote several poems [12] while in France, under the most trying of circumstances, of which the most famous is “Rouge Bouquet” [13]. In that poem, Kilmer commemorates the deaths of American soldiers in the Rouge Bouquet forest [14], March 7, 1918. Kilmer himself recited the poem, also known as “The Wood Called Rouge Bouquet”, during a memorial service shortly after the attack, and it was recited over his own grave at the poet’s internment four months later.

In his last poem, “The Peacemaker” [15], written June 14, 1918, about six weeks before he was killed, Kilmer revealed his lofty and paradoxical vision of the fight “for Freedom and the Right”: 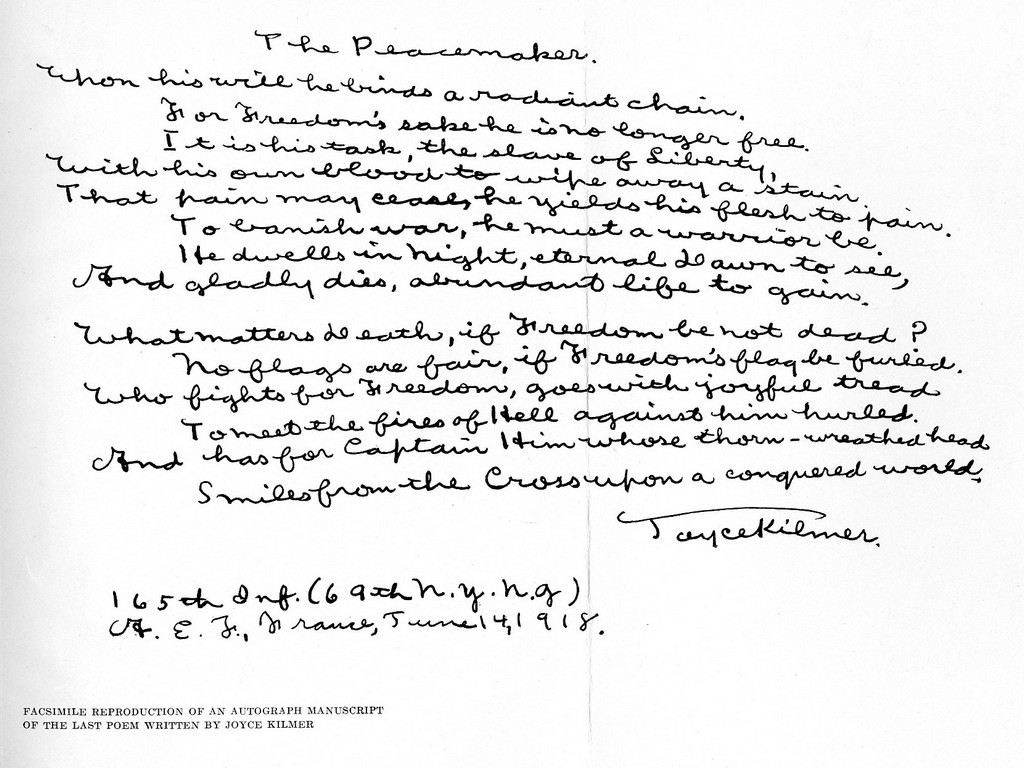 Upon his will he binds a radiant chain,
For Freedom’s sake he is no longer free.
It is his task, the slave of Liberty,
With his own blood to wipe away a stain.
That pain may cease, he yields his flesh to pain.
To banish war, he must a warrior be.
He dwells in Night, eternal Dawn to see,
And gladly dies, abundant life to gain.

What matters Death, if Freedom be not dead?
No flags are fair, if Freedom’s flag be furled.
Who fights for Freedom, goes with joyful tread
To meet the fires of Hell against him hurled,
And has for captain Him whose thorn-wreathed head
Smiles from the Cross upon a conquered world.