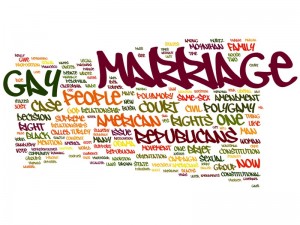 [1]“If we take the widest and wisest view of a Cause, there is no such thing as a Lost Cause because there is no such thing as a Gained Cause. We fight for lost causes because we know that our defeat and dismay may be the preface to our successors’ victory, though that victory itself will be temporary; we fight rather to keep something alive than in the expectation that anything will triumph.” — T. S. Eliot

So many liberals and not a few establishment Republicans are preaching a kind of latter-day Hegelianism that posits an inevitable march toward the deconstruction of marriage and the embrace of homosexual unions. The main vehicle for effectuating this supposedly necessary development is, as always, the federal court system which is now a force for radical social innovation given an infinitely elastic interpretation of the Equal Protection Clause of the 14th Amendment. We have seen this movie before on school prayer, abortion, and pornography. The judiciary, supposedly the “least dangerous” branch of government according to Alexander Hamilton, is a wrecking ball demolishing social norms, community standards, and democratic processes as mediated through a republican, constitutional form of government.

Polling data is cited to demonstrate overwhelming support for gay marriage, whether imposed judicially or legislatively in jurisdictions with a more liberal inclination. This, again, is similar to the drill on abortion when the predictable Pew poll [2] is cited showing 63 percent of Americans want to leave Roe v. Wade untouched. Yet, the abortion issue remains salient, a fundamental divide in the body politic persisting for over 40 years. Moreover, opposition to homosexual marriage does quite well, thank you, when citizens get to vote on the matter as they did on California’s Proposition 8 now under legal assault before the Supreme Court.

The standard technique of supporters of homosexual marriage is not so much to rebut the arguments of opponents but to isolate, denounce, ridicule and otherwise marginalize them. Saul Alinsky [3], call your office. Rather than address, say, questions on the impacts on children, it is much easier to simply denounce opponents as bigots or out of touch. Moreover, bogus scientific claims on the nature of homosexuality or a child’s psycho-sexual development are bandied about without fear of contradiction from the media, which has dropped all pretense of objectivity on these matters. Recent admissions [4] by the readers’ ombudsman and an anonymous writer at the Washington Post that Post staff were on a mission to promote homosexual marriage as this generation’s civil rights issue, was telling.

The panic in the ranks of some Republicans is a thing to behold. Again, this is a re-run of the Reagan-Ford and Reagan-Bush (Sr.) primary tensions as well as many state-level primary races over the years especially on the matter of abortion. The older, more established wing of the party never liked social conservatives, Evangelicals, Catholics, Reagan Democrats, and the rest of the great unwashed who harbor an unseemly concern with the moral ecology of their country, their families, their communities, and society in general. After all, isn’t politics all about money and commerce? If the Establishmentarians succeed in driving these constituencies out of the GOP, or demoralizing them to the extent they stay home and do not vote, they will find their remnant political party to be a very small and lonely club. The late Robert Novak famously observed as much throughout his journalistic career.

Libertarians, for admittedly genuine philosophical reasons, share the repugnance of the Establishmentarians for anything that impinges on “life-style liberalism.” And the defense wing of the party is lukewarm on many social issues and more focused on the defense budget, certainly a legitimate but not exclusive priority of conservative politics. Social conservatives are more supportive of these other interests than those interests are of theirs.

So how is this all going to play out both nationally and within the GOP? Assuming the Supreme Court, for now, leaves the matter to the states, even if it overturns DOMA, we are back to grass-roots politics both within states and the Republican Party. We are, indeed, one nation and two cultures, to use Gertrude Himmelfarb’s formulation, and politics at the local and state level reflects that reality. The Ken Mehlmans, Jon Huntsmans, and Rob Portmans of this world are unlikely to be successful convincing the rank and file to stand down on marriage given the dynamics of Republican primary elections, especially in red states. There the underlying culture is not quite as hip as in California, New York, Massachusetts, or Washington, D.C. Mehlman et al. will argue, of course, that their failure to turn the GOP on homosexual marriage spells doom in the long-run. But Establishmentarians have said this about abortion for decades. Still, the right-to-life forces have thrived both within the GOP and across the nation.

The anti-marriage faction in the party will have to actually win some elections rather than just garner praise from the mainstream media for their politically correct stance on the issue. Recall that neither Huntsman nor Portman actually ran on homosexual marriage to date. The test will come in the 2014 elections when we shall see how various and sundry Republican primaries for governor, House, and Senate shake out.