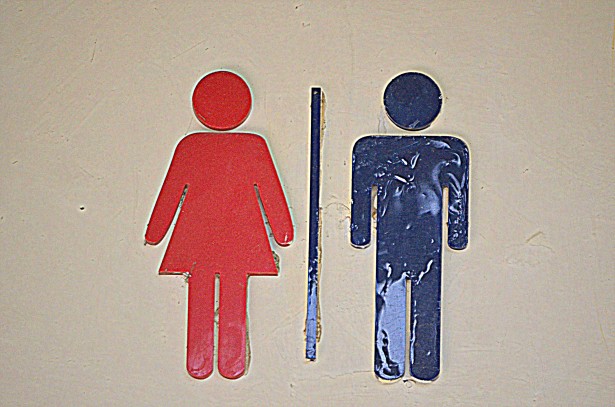 North Carolina Gov. Pat McCrory (R) has become a whipping boy for the advocates of the latest round of the sexual revolution. The Human Rights Campaign [1] has gathered a bunch of business owners to bully the governor in an attempt to get him to back down.

“Your bigotry is bad for business,” is their mantra.
His crime? He signed a law that requires people to use the restrooms of the sex indicated on their birth certificate.

The gender radicals and sexual revolutionaries cannot tolerate this. Gender is fluid. Gender is a choice.

Gender used to be a social construct. Now, gender is a personal construct. Not everyone who has the word “male” on their birth certificate self-identifies as “male.”

But is this bill really evidence of irrational hate and bias?

Let’s look at a few items that suggest we all have a stake in the “gender binary,” especially women and girls.

Item one: A male-bodied transgender claims he/she was raped in the unisex bathroom of the Stonewall Inn [2].

Item two: A man entered a girls locker room [3], stripped, and claimed he had every right to be there, under the new transgender law.

Item three: A man who claimed to be transgender [4] assaulted women in a women’s shelter. He has since been arrested as a sexual predator.

All these incidents bring one thought to mind: What about the safety of women and girls?

If a man dressed as a woman is at risk in an open-access unisex bathroom, what chance does an actual woman have against a potential attacker? If women and girls cannot feel safe in women’s locker rooms or women’s shelters, will society provide any safe public places for women?

Item four: Fallon Fox, a male-bodied transgender [5] fought in a professional women’s boxing match. In less than three minutes, Fox inflicted an orbital bone fracture and a concussion on his female-bodied woman opponent, out and proud African American lesbian Tamikka Brents. Fox also inflicted soft tissue injuries to Brents’ head that were so extensive that they required 8 surgical staples to close.

As one commentator [6] wryly put it, “On Saturday September 13, 2014 in a ‘cage’ in the Springfield, Illinois Convention Center, a crowd gathered to watch something that happens thousands of times a day worldwide: a man battered a woman.”

I am reading a very interesting book called Gender Hurts [7], by a lesbian feminist named Dr. Sheila Jeffreys, who recently retired from her position as professor of feminist politics at the University of Melbourne in Australia. She opposes the transgender movement. She sees it as undermining feminism. She views male-bodied transgenders as, well, men.

Jeffreys sees them as asserting their male privilege, men demanding to be part of the sisterhood. They have not experienced what she sees as the demeaning and unequal socialization and upbringing that is a part of women’s experience.

I would not have expected to agree with a radical lesbian feminist. However, in this case, I absolutely agree with her: Bruce Jenner was never a little girl. I don’t care what kind of fantasy life he has. I was once a little girl. So was Jeffreys. Jenner never was.

Jeffreys sees the workings of male privilege in the stereotyping of women that is so much a part of male cross-dressing. She sees it in the demands that women who are comfortable in their own bodies refer to themselves as “cis-gendered.”

It is almost as if these men were saying to us:

“We men reserve the right to tell you women what it means to be a woman. (Personally, I wouldn’t be caught dead dressed like some of these female impersonators [8]. Which women are they actually impersonating?) If a man says he is a woman, then he is a she. She is allowed to use the women’s restroom, women’s shower facility, and compete in women’s sports. We insist that the entire country refer to this person as ‘she,’ and we will use the power of the State to enforce that demand. We don’t care how cis-women and girls feel about it. They need to be disabused of their cis-privilege.”

By the way, I took a look at the “120 business leaders [9]” who signed the Human Rights Campaign petition excoriating the governor of North Carolina. I counted only 12 with recognizably female names. Maybe Jeffreys is right: transgenderism is just another example of male privilege asserting itself.

So hang in there, Gov. McCrory. You have more allies than you know. Women and girls from around the country and around the world will thank you.

This article originally appeared at The Blaze [10] and is reprinted with permission.