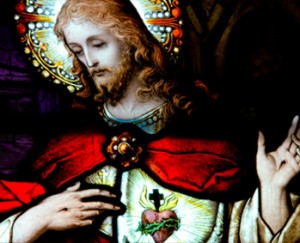 [1]What has heaven to do with earth? Does the Divine One care about the comings and goings of men?  After all, He is “the God of gods and the Lord of lords, the great God, mighty and awesome” (Deuteronomy 10:17). Even Solomon wondered whether or not the Creator really deigns to walk among His creatures: “But will God indeed dwell with men on earth? If the heavens and the heaven of heavens will not be sufficient for You, how much less even this temple I built in Your name” (I Kings 8:25)?

Happily, the Lord not only minds the world, but loves it dearly. In fact, as the Cross demonstrates, He loves it to death. God cherishes that which He fashions.  Glory and praise unto Him!  The work of the Son and the gift of the Spirit are abiding proofs of His affection.  Jesus Christ is the manifestation of God’s tender concern for man, to whom He has given His sweet bride, the Church.  “He loved her and his soul was very much united to her” (Tobit 6:19).

Who are we to receive such wonderful love-offerings? Who are we to be courted by the Eternal Power?  The prayer of King Manasseh is on all our lips: “I have sinned more than the number of the sands on the seashores” (II Chronicles 37:9).  And yet . . .

Jesus of Nazareth is God’s definitive response to man’s search for meaning. He not only shows the way, opens the door, gives the water—He is the Way, He is the Door, He is the Water.  In and through Christ, we learn that life requires death, freedom demands bondage. We only know God and man through love, the moving out of the self toward the Other.  This is the inner life of the Holy Trinity, that eternal community of Father, Son, and Holy Spirit. “If you obey My commands, you will remain in My love, just as I have obeyed My Father’s commands and remain in His love” (John 15:10). “[T]he Father knows Me and I know the Father—and I lay down My life for the sheep” (John 10:15).

God is life. His present of Self is the present of being. This priceless donation is at the very heart of the Incarnation. “For God so loved the world, that He gave His only begotten Son, that whoever believes in Him should not perish, but have everlasting life” (John 3:16). We are saved by the marriage of heaven and earth in the Word-made-flesh. As we proclaim in the Sacred Liturgy, “Dying You destroyed our death, rising You restored our life.”

Hence the venerable Saint Athanasius wrote: “Through this union of the immortal Son of God with our human nature, all men were clothed with incorruption in the promise of the resurrection. For the solidarity of mankind is such that, by virtue of the Word’s indwelling in a single human body, the corruption which goes with death has lost its power over all” (On the Incarnation of the Word).

These are mysterious ideas. Just how do the life, death, and resurrection of Jesus redeem and glorify mankind? God alone knows. The various theories propagated by professional theologians are simply constructs. Oftentimes, as in the case of John Calvin, they are influenced by culture and personal temperament as much as by Scripture and tradition.

Man is a stranger to himself.  The Prophet David says, “The heart is deep” (Psalm 64:6). Furthermore, who knows the plans of the Omnipotent, Who is mightier than we can ever realize? “He stood and measured the earth . . . beheld and melted the nations, and the ancient mountains were crushed to pieces . . . the hills of the world were bowed down by the journeys of His eternity” (Habakkuk 3:6). We can only sigh: “[H]ow unsearchable are His judgments, and His ways past finding out” (Romans 11:33).

All that is certain is that our salvation comes from love and moves toward love.  It finds fulfillment in love, for “love is strong as death” (Song of Solomon 8:6). God reaches out across the cold and terrible distances of time and space, pierces through dimensions, plunges down from heaven—just to lift His little ones up to their proper place, which is by His side, in the kingdom of the Triune Mystery.

Many waters cannot quench love,
Nor can the floods drown it.
If a man would give for love
All the wealth of his house,
It would be utterly despised.”