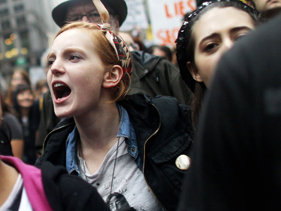 [1]While necessity is the mother of invention, sloth and envy beget mediocrity and upheaval – the twin siblings of secular-socialism.

It is in this vein that a rebellious and increasingly violent spirit of incoherent anarchy continues to fester in urban centers across the nation. This is most evident in the form of the envy-driven “Occupy wherever” nonsense embraced by the “progressive” establishment.

Still, this Obama-supported effort to supplant, through lawless imposition, our free-market constitutional republic with some misguided conception of an outcome-based equalitocracy is rooted in much more than just good old-fashioned class warfare.

Part and parcel of secular-socialism is secularism. It’s fascinating in its predictability. Wherever you find an entitlement-minded Marxist, you’re likely to find a “progressive,” counter-biblical moral relativist.

Case in point: The “Occupy D.C.” protesters, who have squatted – in more ways than one – at Washington’s McPherson Square, have posted a list of rules by which “occupants” are expected to abide. Rule No. 10 requires that folks not “assume anyone’s gender,” but, instead, “go with gender-neutral pronouns” like “comrade.” (Who knew that a so-called “99 percent” of Americans were gender-bending commies?)

Indeed, the opposite of order is disorder. While rebelling against the natural order – whether related to economic liberty or issues surrounding transcendent moral values – many of the less stable elements on the left are exhibiting an increased willingness to move beyond mere disorder to outright violence.

Examples of such violence continue to mount. But beyond the fiery “Occupy” riots in Oakland, and the shootings, murders, rapes and thousands of arrests occurring throughout the dozens of disease-riddled “Occupy” chaos camps around the country, a less publicized example of left-wing violence took place last month in Illinois.

The “Gay Liberation Network” – a militant homosexual activist group of self-described “Trotskyites” – announced that it would be protesting an award ceremony held at the Christian Liberty Academy, an Arlington Heights, Ill., church and school. In the past, when GLN has protested this particular event, Christian attendees have been spat upon and even physically threatened by protesters.

This time, things got worse. The night before the event someone threw two paver bricks through the church’s plate glass doors with a dire warning: “This is just a sample of what we will do if you don’t shut down Scott Lively and AFTAH. … [F—] Scott Lively. Quit the homophobic [s—]!”

The Christian organization, Americans for Truth About Homosexuality (AFTAH), was giving an award to Pastor Scott Lively, a pro-family advocate who, in recent years, has been falsely maligned by leftist groups and media-types like Rachel Maddow, for supposedly supporting the death penalty for homosexual behavior – a patently false charge.

The assailants later posted an al-Qaida-like statement [2] on the “progressive” website IndyMedia.org, taking credit for the attack and calling it a “consequence for hatred and homophobia in our community.” They further threatened the church, warning that “if this event is not shut down … the Christian Liberty Academy will continue to be under constant attack.” Unbelievably, the threat remains posted to this day.

Fortunately, no one has yet been hurt; however, according to the FBI [3], by definition this attack meets all the elements of domestic terrorism.

But none of this is surprising. The flames of violence against Lively, AFTAH and Christian Liberty Academy were ignited long ago. On the other end of the fuse is the Southern Poverty Law Center (SPLC), a hard-left outfit known in past years for monitoring true hate groups like the KKK and neo-Nazis.

After partnering with the admittedly communist GLN, the SPLC had declared, with much media fanfare, both AFTAH and Lively’s organization, Abiding Truth Ministries, along with several other highly respected Christian organizations, official “hate groups.”

This propagandist smear tactic has been increasingly used by the SPLC in an effort to marginalize Christian and conservative organizations with which the group disagrees. Unfortunately, however, we now see that this strategy to dehumanize, can also have unintended (presumably) consequences.

As in Illinois, the SPLC’s dangerous and irresponsible disinformation campaign can embolden and give license to like-minded, though less stable, left-wing extremists, creating a climate of true hate. Such a climate is ripe for violence. After all, these “hate groups” are just like the KKK, right?

Despite all this, even today the SPLC has somehow managed to maintain some level of mainstream credibility. But as it quickly moves further from its left-of-center moorings toward the far fringes of left-wing extremism, its own deceptive activities threaten to undo much of the good for which the organization was once recognized.

After the anti-Christian attack, Bob Schwartz, cofounder of GLN, refused to condemn the violence noting precisely that the victims were “SPLC-designated hate groups.” This comes as little surprise in that Schwartz once threatened to push AFTAH founder Peter LaBarbera into oncoming traffic.

Still, what is a bit surprising is that, like its GLN ally, the SPLC – a self-styled domestic terrorist watchdog organization – has additionally refused to condemn this overt act of domestic terrorism.

Instead, the SPLC released a statement [4], dripping with sarcasm, that piled on the victims. Rather than denouncing the attack, the organization simply lamented that the violence “only strengthened the absurd argument, promulgated by many [Christians]” that left-wing extremists “want to take over America and persecute Christians.”

Yes, it’s official. The SPLC has abandoned all pretense of objectivity.

And so, as left-wing violence continues to spike in coming months, not only should we expect to hear little about it from a sympathetic mainstream media; we should also expect little help from the once-respected Southern Poverty Law Center.

Indeed, it’s hard to do much about the problem when you’re a driving force behind it.