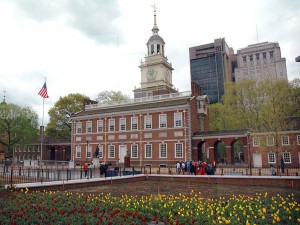 As we celebrate our independence and astounding development from a fledging nation to the world’s superpower, we should applaud the extraordinary contributions of numerous founders. One of them whose accomplishments are often overlooked is John Adams. George Washington, Thomas Jefferson, Benjamin Franklin, James Madison, and his cousin Samuel Adams typically receive the lion’s share of the credit for the creation and early success of the United States.

In fact, John Adams has frequently been viewed as “somewhat of a loser.” He is the only president among the first five who was not reelected, his Federalist Party never again captured the White House, and scholars have not ranked him as a great or near-great president. While David McCullough’s best-selling 2001 biography and the acclaimed 2008 HBO miniseries depicting his exploits increased public interest in his life, Adams still does not receive the recognition he deserves.

Consider these facts. Adams played a pivotal role in the founding of the United States, especially the campaign for independence, the devising of state constitutions, and the establishment of America’s diplomatic tradition. He was a delegate to the First and Second Continental Congresses, a diplomat to France and Holland, a prodigious political thinker, and the first vice president and second president of the United States. Physician Benjamin Rush claimed that “every member of Congress in 1776 acknowledged” Adams “to be the first man in the House.” Jefferson simply called him “our colossus on the floor.” During the Revolutionary War, Adams served on Congress’ Board of War and helped procure European aid. The Massachusetts Constitution of 1780, which he principally authored, was “the most important American source” for the federal Constitution.

Scholars have rightly labeled Adams a “radical firebrand,” the American Revolution’s “premier political theorist,” a competent chief executive, and an influential statesman in his post-president years. His well-developed political philosophy, vital contributions to American independence, and impressive character all stand out even in an era of remarkable founders.

The only two men who could not be removed from America between 1774 and 1787 without fundamentally changing its history, scholar Richard Ryerson argues, were George Washington and John Adams. “Their unique combination of character, personality, talent, and education” was “required to design, initiate, and sustain the American Revolution.” Adams, historian Paul Conklin argues, surpassed “all other architects of American independence” “in the scope of his contributions, in the length of service and personal sacrifice, and in the sophistication of his political advice.”

“Adams played so many important roles at such critical points in the movement for independence and in the formation of the national polity,” political scientist C. Bradley Thompson asserts, that studying his thought and deeds is crucial to understanding the founding.

“Adams was ridiculously vain, absurdly jealous, [and] embarrassingly hungry for compliments,” historian Edmund Morgan contended, “but no man ever served his country more selflessly.” Adams sacrificed a promising law practice, time with his family, and his physical health and put his life at risk to travel 29,000 miles, crossing the Atlantic four times, and traversing France, Spain, England, and the Netherlands to aid his country. Although not as cosmopolitan or clever as Jefferson and Franklin, Adams, Conklin asserts, was “better informed, more critical and logical in his thinking, and more gifted in argument.” No other American public figure of his generation “read so much, absorbed so much knowledge, or displayed so much erudition.”

Like Washington, as president, Adams helped preserve America’s neutrality. Facing threats of war against France and England and civil strife at home, Adams maintained America’s independence, improved the navy, negotiated a treaty with France, and worked to end political disputes. The nation was stronger and more prosperous when he left office. Like Washington, Adams emphasized the efficacy of education, the perils of wealth, the necessity of private and public virtue to America’s success, and the importance of religious liberty and toleration.

Today when many politicians seem to be guided primarily by opinion polls and concerns about reelection, Adams’s approach to political leadership is refreshing. He urged citizens to choose leaders based on their character, education, experience, and principles. Statesmen, Adams argued, should carefully study issues and situations, make judicious decisions, and work to convince their constituents of the merit of their positions. As president, he searched diligently and often alone to determine the most prudent policies and courses of action. Adams consistently sought to do what he deemed best regardless of how the public responded.

Adams’s faith played a vital role in his long and distinguished life. It significantly affected his worldview, determined his moral standards, helped shape his character, and supplied many of his goals. His belief that God governed the world and directed the course of nations and the lives of individuals gave him the courage and confidence to fight passionately and effectively for the causes he valued and to contribute so significantly to the birth and success of the United States.