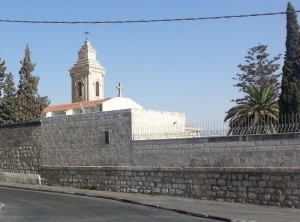 JERUSALEM—“Welcome to our new reception room;” Sister Agathe offered her visitor a warm greeting. The nun is in charge of finances for the Carmelite Sisters’ convent on the Mount of Olives in Jerusalem. Substantial renovations were just completed. Everything is clean and bright.

“The renovations help us to receive guests better, while at the same time protecting our enclosure,” the young French woman said. “After all, we usually do not leave the convent. However, many people come to us. We are deeply grateful to our benefactors and we can thank them best through our prayers.”

The Carmelite convent, built in 1874, is the oldest in the Holy Land. Numerous pilgrims visit the sanctuary every day to worship at the site where, according to tradition, Jesus taught his disciples the Lord’s Prayer. The walls are covered with elaborate panels featuring the text of the prayer in numerous languages.

The convent is located—on the premises of the Pater Noster Church—in the Arab and predominantly Muslim eastern part of Jerusalem. Said the nun: “Time and again, it moves me deeply to think about just how sacred Jerusalem is to the beliefs of so many. We can hear the muezzin’s call to prayer here, but also the sounds of the bar mitzvah celebrations of the Jews. How dearly we wish that justice and peace would reign.”

The nuns get along well with the Muslims in the neighbourhood. “In France, we nuns are looked at strangely when we go out into the streets in our habits. It is different here. We are respected. When a fellow nun from Lebanon died, Muslim neighbours even brought flowers,” Sister Agathe reported.

However, despite the high walls surrounding the convent, the reality of the Holy Land, which is often marked by violence and hatred, affects the lives of the nuns as well. “Time after time, tensions soar between the Israelis and Palestinians here in this area. Then, the stones start flying directly in front of our door. This of course affects us deeply. After all, we love Jerusalem and the Holy Land. Through our prayers, we want to serve peace in the Holy Land.”

However, the nuns not only pray for the Holy Land. “We are here at the very heart of the church. Therefore, we pray for the major concerns of the Church and the Pope,” said Sister Agathe. The concerns of the pilgrims, however, are also treated with reverence. “Visitors from all over the world leave small notes with their intentions in the grotto where Christ prayed together with the Apostles. We make note of these. Then, once a month, a priest celebrates a Mass for them,” she said.

Sixteen nuns from all over the world live in the convent. “That is a good number. We primarily attract international candidates. However, we would like to have more nuns from the region,” the nun said, adding “we hope that the canonization of our fellow nun Mariam Baouardy from Palestine, which took place last May, will draw renewed attention to us in the Holy Land.”