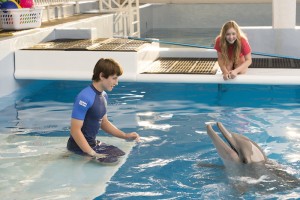 [1]What does a dolphin without a tale, acclaimed writer/director/actor Charles Martin Smith, and a group of renowned stars like Harry Connick Jr. and Morgan Freeman mean for Hollywood? In the first Dolphin Tale movie, it meant a major $100 million, motion picture hit worldwide and now, it means a sequel Dolphin Tale 2 [2]. But more importantly, it means infusing a message of hope and fortitude in the hearts of millions through telling the stories of two dolphins, named Winter and Hope.

The first Dolphin Tale was about the heartbreaking yet inspiring story of Winter- a dolphin that lost her tail in a run-in with a wayward crab trap. After being brought to the Clearwater Marine Aquarium, (CMA) a groundbreaking prosthetic tail was made for her, saving her life and touching the hearts of everyone who worked with her. The film impacted the lives of amputees and veterans who still flock to CMA to visit Winter.

Almost unbelievably, the night of the wrap party for the first movie, another dolphin was rescued. This orphaned animal was named, “Hope,” and the cast and crew began to realize that the Dolphin Tale story wasn’t over yet.

Director and screenwriter, Charles Martin Smith mused, “I hadn’t been at the wrap party- I’d just made a movie! I was tired and went to bed early. When I heard about Hope, and was told about her story and how it intertwined with Winter’s, I knew we had to make another movie. Simply because we hadn’t finished telling the story yet.”

However, making a sequel was no small matter. The actors involved in the first film were all working on other projects, and CMA, where the first movie was shot, was growing quickly and packed with more and more visitors every day. Smith, however, had faith. He began writing the script and getting in touch with all those involved in the first movie, asking if they’d were interested in coming back for another.

Initially, the former cast members were shocked that a sequel was even possible. Harry Connick, Jr. who plays Dr. Clay Haskett, head of CMA, recalls getting the phone call saying they wanted to make another movie, and believing it was a joke. “I thought we were done and was not sure how we could add to it,” he said. “But when I read the script, I thought the second movie could be even better than the first one.”

Despite how strange the idea of making a sequel to a true story was, not entirely everyone was so surprised. Austin Heighsmith, who plays Winter’s trainer, was present during Hope’s rescue and mentioned, “I couldn’t believe it. It was more of an act of God. The movie was writing itself just as we were finishing the first.”

Outgoing calls to former cast members were slowly returned. “The answer from every single person was a resounding, “Yes!’

It’s quite remarkable to have a based-on-a-true story film make a sequel. Even more remarkable is to have nearly every cast member, and over 80% of the first movie’s screw return. Austen Stowell, who plays an Army veteran, reflected that the cast and crew were unusually close. “We became family,” he said. “Coming back that first day of filming Dolphin Tale 2 was like a giant family reunion.”

There was still the issue of filming at the aquarium, which posed some very real challenges not found on most movie sets. David Yates, CEO of CMA and assistant director of Dolphin Tale 2 noted: “Smith really gets what we’re about at the aquarium, which is very important to our staff. He understood that we’re not a set; we couldn’t just shut down our operations.” He said that during filming, the animals were cared for without interruption. “Frankly, it couldn’t have gone better,” he said.

When the movie crew returned to CMA to film, however, they found the place to be very different than how they had left it. They felt it was important to communicate the massive changes the aquarium had undergone due to the first film. “It’s undergone a complete renovation,” Production Designer David J. Bomba explained. “We wanted to show that it’s become a major tourist destination because of the crowds that came to see Winter, but conceptually it’s still a rescue facility and everything still revolves around that.”

The CMA’s progress became pointedly obvious, from the increased amount of space the facility had to the clothes the staff wore. “Last time, people threw on faded t-shirts and shorts,” the returning Costume Designer, Hope Hanafin reflected. “Now a corporation has come in and designed uniforms, so there’s a stratum to it, delineated by color.” She went on to explain how this streamlined clothing manages to help communicate the developments in both the characters and at the aquarium. She used the Dr. Clay Haskett as an example. “You get a sense that Clay’s world has built up in a hierarchical way, in which he is not entirely at home. He takes a stand, wearing the old CMA t-shirts or his own Hawaiian shirts, with shorts and flip flops, even when he goes to the boardroom.”

The characters portrayed in this film are delightfully real and organic. Smith admits that he had an advantage in writing Dolphin Tale 2 that he didn’t have while writing the first film, because he knew the actor’s he was writing for. He mentions going over lines in his head while brainstorming and realizing what would seem natural for an actor to say, and what wouldn’t work.=

Inspiring stories are told every week in the box office; moviegoers are often watching the same tropes and stories, week after week, month after month. But Dolphin Tale 2 is a strikingly unique narrative that brings to life the struggles of humans and animals alike. This is a film that promises to entertain, but more importantly undertakes the responsibility of bringing a message of courage and inspiration. It broadcasts, loud and clear, that in even the darkest situations, there are always ways to find “Hope.”