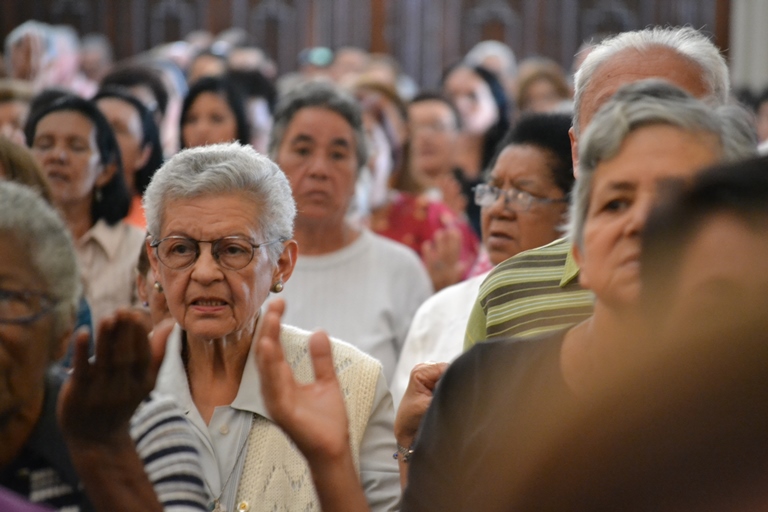 These women praying for peace in Venezuela, 2014

NEW YORK—Venezuela was once the country of dreams—but those dreams have turned into nightmares. Such is the sad verdict of one of the country’s bishops.

Case in point, Bishop Jaime Villarroel of the Diocese of Carúpano, told international Catholic charity Aid to the Church in Need: Most of the young people in the north-western state of Sucre have left university because they “do not have the money for paper, let alone for photocopies or pens.”

A university education has become the privilege of a select few, the prelate charged, adding that many young people join gangs or become criminals: “The people are afraid,” he continued, as drugs, murder and torture have now become part of everyday life. “We are worse off than ever. Hospitals have neither medicine nor bandages. There is no food in the houses. Trucks are constantly being plundered because the people are hungry and no longer have any regard for anything, the bishop said.

Citizens receive food rations each month that include flour, noodles, butter and sugar, but the portions are too small. “Each family receives 300 grams of powdered milk, half a kilo of pasta or 200 grams of butter. If they would like to buy something else, such as meat, eggs or fish, then they have to pay for it with money that they don’t have,” Bishop Villarroel said.

He continued: “the children especially are suffering from malnutrition. The food rations are supposed to be enough for a month, but they don’t even last a week. The people are fainting from hunger. Famine reigns, which used to be unthinkable for Venezuela. We no longer know what to do or to whom we should turn. The police and also the politicians are often corrupt. We feel forsaken.”

The Church has a crucial role in mitigating best it can the impact of the crisis. “It is our job to be there for our people and to relay a message of trust in God. Pastoral visits are a source of great strength in this terrible situation,” the prelate stressed.

However, the Church is also battered itself. In the Diocese of Carúpano—where only 2 percent of the people go to Mass, and where evangelization efforts “haven’t reached the hearts of the people”—the bishop said, churches and even cathedrals are subject to violent attacks. Elsewhere, four young seminarians were recently assaulted and humiliated—with no response from authorities.

Bishop Villarroel said the Church and its people have to do their utmost to persist in a “culture of survival,” a severe test for the spirit of the country.