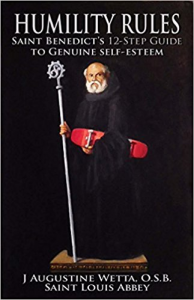 Recently a friend of mine gave this book to me, and I read it in a day or two.  It’s set up in 12 “steps” and offers practical advice after the fashion of St. Benedict’s Rule. It’s good for anyone to read, but the reason why I emphasize teenage boys is because Wetta is a monk, a high school teacher, and a rugby coach. Furthermore, he’s got a great sense of humor, used to professionally juggle, and loves surfing.  He’s a manly man–perfect for teenage boys.

Wetta even has a little chapter on dating wherein he addresses the infamous question, “How far is too far?” He ends his rant on the wrongness of this kind of thinking with, “Feel free to do anything you could brag about to your mom.”

Then there’s a chapter on impure thoughts. He describes his own struggle with this. “While reading a biography of Saint Benedict, I learned that when he was tempted, he threw himself into a rose bush; so I said to myself, if Saint Benedict can do it, so can I. I went out into the garden behind the monastery and jumped right in.” You can imagine what happened next…getting stuck for an hour and half, and then having to explain himself to a brother monk…poor guy. It’s a great story for teenagers.

But he’s got great advice for all walks of life, not just teenagers. For example, he was once asked to preach at his best friend’s wedding, so he sought the advice of the wisest monk in his abbey, Brother Luke, who happened to be napping. Brother Luke opened his eyes and calmly told him, “Tell him [the young married man] that there will come a day when he will want the window open and she will want the window closed.”

Then Brother Luke went back to sleep. Wetta was taken aback. What simple, but profound advice!

As a mother, I too found this book inspiring and funny. For example, let me quote at length a passage that I could relate to:

When I [Wetta] was seventeen, I burned a hole in the living room carpet. I didn’t do it on purpose, but let’s just say I wasn’t thinking when I set the hot kettle of popcorn on the rug in front of the TV. A few minutes later, my mother was standing before me with tears in her eyes, saying, “How much of this house to you plan to destroy before you finally leave for college?  Just let me know so I won’t get too attached.” That was a few weeks after I had decided to juggle bowling balls in my bedroom, and several months after I had backed the family car into the garage door.

Any mother who has boys will understand what Wetta’s mother was feeling. How often have I lamented the destruction of my house? From holes in the walls to broken toilet seats, my husband and I joke about how we can’t have anything nice.

And finally, each chapter concludes with Wetta’s homework for the reader. This may be the best part of the book – this simple, practical advice. Let me give you a few examples of his suggested homework:

Now who wouldn’t want their teenage boy (or girl) to read this awesome book?