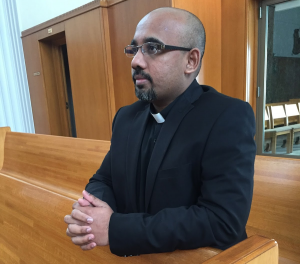 Mothers make great sacrifices for their children, that is widely known. That they are often the gateway to sainthood perhaps less so, and yet, behind every great saint (to steal a phrase), is likely to be an attentive mother.

Fr. Christy David Pathiala would probably agree. He speaks of his own mother with great reverence, and along with that comes his devotion to the Virgin Mary, who touched him profoundly as a child when he was struck with a sudden seizure-like illness that baffled his parents and his doctors.

“I was in the I.C.U. for 12 hours and the doctors didn’t have hope,” he says. “I wasn’t responding to medicines and they told my parents to prepare for my death. But they didn’t give up. My parents’ prayers saw me through.”

He recovered from the acute illness, but it left him with unremitting fevers during which his body temperature would rise dangerously. He remembers being put into ice baths. His body temperature wasn’t easy to regulate even when he wasn’t sick. For instance, he says he couldn’t eat or drink anything cold, or face a cold wind, as that would trigger the fever. He remembers well the worried faces of his parents, gazing down at him during his childhood illnesses.

In 1989, when he was four years old, his parents took him to the famous Marian shrine in Lourdes, France, the place where the Virgin Mary appeared to St. Bernadette. His mother had always prayed fervently for a cure for her son, and she had faith that this trip would be the difference. On their way to the shrine they passed an ice cream parlor and the young Christy looked at it with longing.

“Because ice cream was cold I couldn’t eat it. When my brother ate ice cream, my father, out of pity, would always buy just the cone for me. I saw that parlor and begged my mother to let me have ice cream. “She had such faith,” he said. She said, “‘First we’ll go to the baths, and even if he dies, he’ll have that ice cream.'”

He remembers standing in line for the bath into which those searching for healing are dipped in the water that flows from the spring in the grotto where Mary appeared to St. Bernadette. While they were there, he and his father were approached by a woman pushing a child in a wheelchair. Amazingly, she placed five francs in Fr. Christy’s hand and said, “Go have that ice cream.” As she was leaving, she said to his father, “Pray for my son.”

When his mother rejoined them, they told her about the woman and they looked everywhere for her but could not find her. Christy was dipped into the pool, and then the family returned to the ice cream parlor. “I had chocolate ice cream,” Fr. Christy says. He admits he didn’t particularly like it, but he was free to try other flavors afterward because the fevers were gone. He believes the woman was the Virgin Mary, and that the child in the wheelchair was Jesus. “After that day, I had the feeling she was telling me, ‘I’m calling you for something.’ I always talk to her in my prayers,” he adds.

He didn’t know at the time that the calling would be to the priesthood, but there were other clues. He was visiting Rome with his family and during a papal audience he came to the attention of Pope St. John Paul II, who bent over and hugged him. On that same trip, he was walking with his father when another priest walked up to them, pointed to his own priestly collar and said, “One day this child will become like me.”

“I had forgotten it, but my father reminded me of it during my ordination,” he says. “Looking back, I try to link how God has been guiding me throughout my life. I try to live in the present and let God decide how things will turn out.”

It is with that philosophy that he took a sabbatical from his position as the Vice President of St. Albert’s College (Autonomous) in Kerala, Southern India. He is in Bismarck, North Dakota, serving at the Cathedral of the Holy Spirit while studying at the University of Mary, working toward an eventual doctorate in Computer Science.

Fr. Christy shares his faith and his stories often because he says he wants people to know about his remarkable road to the priesthood. He says he will always have a special devotion to Mary and to his own mother, the women whom he credits with changing his life.