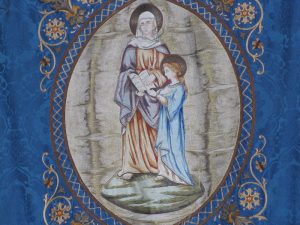 [1]Years ago, I attended a non-Catholic, Christian event with a couple of my teens at our civic center. It was called “The Fire” and was an all-out, sing-and-praise-your-heart-out-for-the- Lord evening.

But in the midst of thousands of people, a feeling of emptiness unexpectedly came upon me. I felt the absence of those that were missing: our brothers and sisters in heaven. It suddenly hit me that my heavenly mother and the angels and saints had not been invited to this otherwise wonderful event, making it less wonderful. Catholics like to include our whole family. That is the feeling that had come upon me — some of the family was missing. We know the only intercessor between God and man is Jesus (1 Timothy 2:5). We also understand “the prayer of a righteous man has much power” (James 5:16). So, we tap into the powerful prayers of the righteous in heaven.

Our Grandmother Loves Us

As part of the great cloud of witnesses (Hebrews 12:1), someone we should especially hold near and dear is our heavenly grandmother, St. Anne — the grandmother of Jesus. I never really had an earthly grandmother — one died when my mother was a teen and the other while I was very young — but I am a grandmother now. It is natural to love the children of our children, and we are the children of St. Anne’s daughter. She bore the Immaculate Conception in her womb and is the grandmother that God chose for his Son, so imagine the power of her righteous prayers.

Although I’m named after her for my middle name, I mostly neglected her for most of my life. Now that I’m a grandmother myself, however, I realize what a dear saint she is.

What we understand of St. Anne [2] comes from apocryphal literature, (meaning we can’t be certain of its authenticity) chiefly the Protoevangelium of James, which dates back to the second century.

“We are told that Anne, wife of Joachim [3], was advanced in years and that her prayers for a child had not been answered. Once as she prayed beneath a laurel tree near her home in Galilee, an angel appeared and said to her, ‘Anne, the Lord hath heard thy prayer and thou shalt conceive and bring forth, and thy seed shall be spoken of in all the world.’ Anne replied, ‘As the Lord my God liveth, if I beget either male or female, I will bring it as a gift to the Lord my God; and it shall minister to Him in holy things all the days of its life.’ And thus, Anne became the mother of the Blessed Virgin Mary.“

We know of an early devotion to St. Anne from Emperor Justinian I of Constantinople, who dedicated a shrine to her in the middle of the sixth century. There are two eighth-century paintings of St. Anne in the frescoes of St. Maria Antiqua. She is mentioned in a list of relics belonging to St. Angelo in Pescheria, and St. Leo III (759-816) presented a vestment to St. Mary Major which was embroidered with the Annunciation, St. Joachim, and St. Anne.

Her two most famous shrines are at St. Anne d’Auray in Brittany and at St. Anne de Beaupre in the province of Quebec. The shrine of St. Anne de Beaupre [4] is in de Beaupre, Canada where the first chapel was built more than 360 years ago, in New France (Canada) in 1658. Today nearly one million visitors come annually from all around the world, many claiming to receive miracles.

The first reported miracle happened during the construction of the original church when Louis Guimont was healed of crippling back pain after laying three stones in the foundation of the church. Today the pillars at the entrance to the Basilica are covered with crutches, canes, and braces representing those that have been healed.

For those wanting to get to know St. Anne better and increase their devotion to her, you can join the online group, The Grandchildren of St. Anne [5]. It was formed spread devotion to St. Anne and adopt her as our grandmother to obtain many, graces. The creator of this site, Dr. Brian Kiczek, is also the author of the new book, (available on Kindle) God’s Grandmother: Saint Anne [6]. The book includes a re-enactment of her life gleaned from historical writings, prayers and devotions, saints’ quotes about her, reports of miracles attributed to her, and information about the Basilica of the Shrine of St. Anne de Beaupre.

Pray More Novenas [7], a site that periodically leads novenas and sends out email reminders, is run by a married couple, Annie and John Paul. Annie prayed this novena to St. Anne [8] for a husband and a short time later met her husband.

Although St. Anne must have lived a seemingly uneventful life during her lifetime, she was the grandmother of the Savior of the world. So, it is no surprise that she would be a powerful intercessor. Her feast day is July 26.