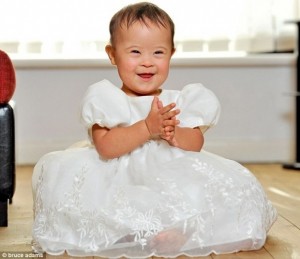 [1]On November 10, the Conseil d’Etat [2] ruled it “inappropriate” to show happy children with Down syndrome on TV, as that sight could “trouble” women who chose not to give birth to their disabled children.

With this pronouncement, the French judges upheld a previous decision by the CSA (“Conseil Supérieur de l’audiovisuel” – equivalent of the US Federal Communication Commission). In 2014, CSA banned the diffusion of the video “Dear Future Mom [3],” an award-winning short movie that was released on World Down Syndrome Day and broadcasted by some French media outlets.

The video was meant to sensitize parents about the reality of a life with Down syndrome. Answering to the fears of a pregnant woman, whose unborn baby had just been diagnosed with this genetic disorder, some adolescents appear on the screen. For two minutes, they tell their “future mums” that they can do everything other kids can do. They explain that they can read, go to school, fix bicycles, … and, eventually, even pay their own rent. They are happy to be born, and they simply say it.

This video was a response to the legitimate fears expressed by disability rights advocates [4], and shared by a good number of “unbiased” commentators [5], about the next and perhaps very close extinction of people with Down syndrome. As of today, 90% of pregnancies that are diagnosed with Down syndrome are aborted worldwide. In France, where prenatal screening is enshrined in public policy,  the number increases to 96%.

Regardless of the honorable aim of this video, and in spite of the international calls for “inclusion” and “acceptance of diversity,” a few negative reactions by some “troubled” French viewers were enough to stop the screening. The administrative judges rejected the appeals that were filed against CSA’s decision by the young adults born with trisomy 21, and by two associations that defend the rights of individuals with Down syndrome.

From a legal perspective, while undermining the dignity of people with disability, whose mere appearance may “trouble” the conscience of their prospective mothers, the ban is a limitation of their freedom of expression. According to Éric Morain [6], an expert lawyer in the media field, “The decision of the Conseil d’Etat states that freedom of expression of individuals with trisomy must bow down to the right to have an abortion.”

Morain explains also that this judgement is unclear in that, on the one hand, it admits that the video serves a “general interest,” as required by the French law regulating media advertisements; but, on the other hand, it holds that its broadcasting is also “inappropriate,” being “susceptible of harming the consciences of women who, as provided by the law, made different life choices.”

In brief, according to the French Court, the possibility of regret that this ad may cause for a woman who chose to abort her baby is per se sufficient to annihilate its “general interest” feature.

The threat to freedom of expression, when it consists in defending life, is so imminent that the European Center for Law on Justice (ECLJ) launched a call for action [7]. In France, a Parliament’s Commission just passed a bill targeting pro-life websites: it creates a new crime of “digital interference [8]” to abortion.

From a moral, more human perspective, the outreach of this ban is so evident that former president of US Conference of Catholic Bishop, Archbishop Joseph Kurtz of Louisville, decided not just to speak of the value of life in general terms, but to share his own personal experience [9]. “In the case of my relating to my brother, it is not a cliché to say I received much more than I ever gave… Because of him I am a better person.”

As this video was being presented in 2014, in the Economic and Social Council Chamber at UN headquarters in New York, abortion groups were trying to have abortion recognized as a human right in a conference room immediately underneath the ECOSOC Chamber. The French administrative pronouncement might suggest that the latter voices won the battle. The last word, however, may be different.

Jerome Lejeune foundation USA [10] – which was one of the appellants – announced its intention to bring the case to the European Court of Human Rights, “to defend the rights of expression of people born with trisomy 21, free from censorship.”

It may be helpful to remind courts, as well as fearful mothers, that, according to the surveys [11], individuals with Down syndrome report comparatively high levels of personal satisfaction. 99% of people born with this genetic condition report feeling happy with their lives. 99% of these people’s parents say they love them, and 97% of people with Down syndrome say they like who they are.

Somehow, the mixed message coming from the French authorities echoes a statement by Margaret Sanger, founder of Planned Parenthood. “We do not want word to go out that we want to exterminate the Negro population.” “Negroes” were just replaced by people with Down syndrome.