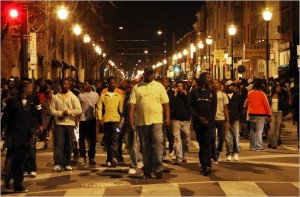 [1]Peoria, Mobile, Boston, Chicago, Baltimore, Atlantic City, and now Milwaukee, my home town, has been plagued by violent flash mobs. And that’s just in the past week.

Flash mobbing initially began as an experiment in social networking. On June 17, 2003, a crowd of about 100 people, drawn by text messages, emails, and blogs, gathered in the furniture department of Marcy’s department store. They had been instructed by the “moberators” to tell the salespersons that they were members of a free-love commune and had come to purchase a love rug. Their item of interest was a rug worth $10,000. According to various reports, the mob dispersed after about ten minutes of discussion; a relatively harmless prank. After that, a series of flash mobbings occurred around the world involving activities like spontaneous dancing, applauding, and shopping for non-existent books and music in a bookstore. The trend subsequently fizzled out.

Until recently. Flash mobbing is back. This time, it isn’t about harmless pranks; it’s about robbing, looting, and beating. It’s not about rallying for fun; it’s about mobilizing for aggression. It’s scaring the daylights out of people across our nation, forcing them to lock themselves in their homes and live in fear. Flash mobbing is mass bullying with deadly effects.

As I read the news reports, my heart shudders and a quiver runs down my back. How terrible! How frightening for those people! Then I shrug my shoulders, sigh, and tell myself, Well, there’s nothing I can do.

Oh, but there is. There’s something we all can do.

First, we can refuse to allow ourselves to be gripped by fear. Fear breeds panic, and panic is exactly what the flash mobs want. That’s not to say we should brazenly strut through the streets, waiting to “take on” the mobs. It means taking all possible precautions and living smart rather than fretful.

Second, we can be alert. We can get to know our neighbors and our surroundings, join the neighborhood association, and be ready to report suspicious activity to the police. The same holds true when we’re out in public – be watchful.

Third, we can fight back, not with material weapons (leave that to the police), but with spiritual ones. This, I think, is the most important means by which to engage in the battle against this random violence. Of course, if we’re under threat of harm, we have to take direct action to protect ourselves. But we know from our Catholic history that we have powerful spiritual weapons at our disposal that can fend off adversaries of all kinds. We also know that the battle is taking place on all fronts, not just in the areas attacked by flash mobs. It’s not only the concern of the people in those cities; it’s the concern of all of us.

I think of the many battles in which the Israelites faced insurmountable odds against stronger and more numerous enemies and won. I don’t doubt they fought smartly, but the victories were wrought primarily by their unshakeable faith in God. And who can forget the story of David and Goliath?

In 1571, a meager Christian fleet faced a strategically decisive battle against the Turkish fleet – then the most powerful naval force in the world – in the Battle of Lepanto. The Christians were so outnumbered, that there seemed to be no real hope for a Turkish defeat. Realizing the disadvantage of the Christian navy, Pope Pius V called for all of Europe to pray the Rosary for victory. They prayed; the Christians won.

On October 8, 1871, in drought-ridden northeastern Wisconsin, a spark set off the Peshtigo Fire, the deadliest fire in American history. It eventually destroyed more than a million acres of land and killed 2500 people. Winds reached hurricane force and temperatures reached 2000 degrees. In the town of Champion, in a humble wooden structure called Our Lady of Good Help Chapel, Marian visionary, Sr. Adele Brise, huddled in prayer with the townspeople and their animals, begging for Gods’ mercy and protection from the blaze. They knelt before the altar, adored our Lord in the Eucharist, prayed the Rosary, and watched as the flames surrounded them, combusted the surrounding properties, and arched over the compound. Not one inch of Our Lady of Good Help was harmed; fence posts along the property line remained intact on the inside yet charred on the outside.

In all of these situations, the adversary seemed impossible to overcome. Trust in God and ardent prayer won the victory. Flash mobs are a real danger, and it’s up to us to take up our spiritual weapons to defeat them. When we experience or hear about these horrible affronts, we can send up a “Flash Prayer” of petition and supplication.  We can’t run out and physically stop them, but we can take up the Rosary, kneel before the altar and beg God’s mercy and protection – for us and for them.