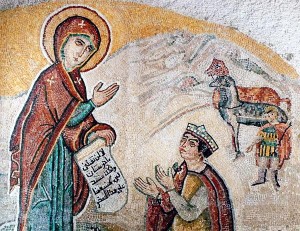 Among all kinds of cultural, political, and interfaith dialogues, the one between Christianity and Islam is arguably the most interesting. Many of my friends from the Western world regard Islam as some kind of a mysterious, exotic, almost “unknowable” religion. However, some scholars, such as Hillaire Belloc, view Islam not as a totally separate religion, but one of the Christian heresies [2].

Historical speculations aside, Islam does have many things in common with Christianity, particularly with the Catholic Church (a.k.a. THE Christianity!). Living in the world’s biggest Muslim-majority nation gives me the privilege to be up and close with their teachings and practices on a daily basis. Remember that some cool dude in the past said: “Friendship is born at that moment when one person says to another: What! You too? I thought I was the only one”? So here are five common grounds between Christianity and Islam that can be used as a possible bridge towards unity:

The Muslims are big on Arabic; they believe Arabic is the language of heaven. Some Muslims, at least those where I live, think so highly about this language to the point of believing it is exclusive to Islam.

Now I’m not asking Christians to be fluent in Arabic, but we can try showing, little by little, that we use Arabic too. How do we do that? By turning to our Eastern Church brothers, of course! If you have Muslim friends on Facebook, for example, why don’t you try sharing videos about the Byzantine Divine Liturgy or a Coptic Holy Mass?  Or you can do it like me: every now and then, I like to put up an image of an Arabic calligraphy of the Lord’s Prayer as my online avatar or display picture. This usually opens an opportunity for conversations and an enforcement of mutual respect.

We know that Muslims fast during their holy month of Ramadan, but do they know that we fast too? Almost all Muslims whom I encounter here apparently don’t! After I tell them, I can see that they generally become more respectful and open towards us. Make sure you are well-versed about the rules of Catholic fasting and their dogmatic reasoning, if applicable. Some of the smarter or more interested Muslims will certainly ask you that.

This is where the case of mantilla (chapel veil) comes in handy. Regardless of what Islam actually teaches, the Muslims themselves usually view women veiling as a symbol of modesty and piety. You can use this as an opportunity to talk about the traditional practice of veiling in Christianity, and maybe even introduce the mantilla to them. Show them pictures of first ladies from various nations wearing veils while visiting the Pope. Exchange teachings about how the two religions view the human body in general, and the female body in particular (Theology of the Body, anyone?!).

Catholics have the rosary (and lots and lots of chaplets), Muslims have their tasbih. Most of my Muslim friends had not known that Catholics had prayer beads too, until I happened to pray the rosary in front of them (I did this a few times because there were no other rooms suitable for private praying sessions). They always got pleasantly surprised and good-naturedly asked what I prayed about. Sometimes they even asked the technical stuff, like if there’s a specific time to pray it, or a specific use. So as Catholics, make sure you can explain our garland of roses (in a beautiful manner, preferably!), and don’t forget to ask the same questions back in order to forge friendly back-and-forth’s.

Speaking of the rosary…

If Protestants think Catholics worship Mary, they should take a look at how Muslims exalt Maryam umm Isa (Mary, mother of Jesus). Sure, our Muslim neighbors do not make statues or images of the Blessed Virgin—that’s because Islam forbids against the depiction of animals and humans—but they grant her titles like umm Nut (the mother of Light), Tahirah (she who was purified), and Marhumah (she who was enveloped in God’s mercy).

Moreover, both the Catholic Church and Islam teach that Mary is an immaculate conception and is preferred by God above all women. This is shown by at least two verses from the Quran:

“My Lord! Lo! I am delivered of a female – Allah knew best of what she was delivered – the male is not as the female; and lo! I have named her Mary, and lo! I crave Thy protection for her and for her offspring from Satan the outcast.” (S. 3:35-36) — This passage illustrates the joy of Imran (Joachim) and Anna at the birth of Our Lady, and their plea to God that their daughter and her offspring may be spared from Satan.

“Behold! the angel said: “O Mary! God hath chosen thee and purified thee – chosen thee above the women of all nations.” (S. 3:42) — This is a passage about the Annunciation, one of the most important events in the Quran.

Fr. Ladis J. Cizik has written an entire article on the idea that Marian apparitions are part of a bigger peace plan with the Muslims (“Our Lady and Islam: Heaven’s Peace Plan [3]”). AsiaNews recently published an article about this common devotion of Our Lady (http://www.asianews.it/news-en/Millions-of-Muslims-devoted-to-Our-Lady-and-eager-for-exorcism-28577.html [4]).