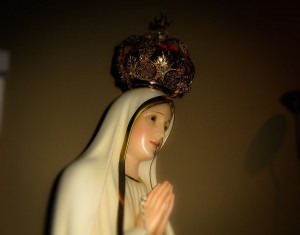 [1]If ever there was a good time to make reparation for the offenses to the Blessed Mother, now would be a good time.  Even if you have already made the Five First Saturdays, it’s something we can do again and again.

1) Against her Immaculate Conception.

3) Against the Divine Maternity, while refusing to receive her as the mother of mankind.

4) By those who publically implant in the hearts of children indifference, disrespect, and even hate against the Immaculate Mother.

5) By those who insult her directly in her sacred images.

Our Lady told Sr. Lucia that she promised to assist at the hour of death with all the graces necessary for salvation all those who, on the first Saturday of five consecutive months:

Information taken from the book Spiritual Guide for the Salvation of Souls and World Peace [2].