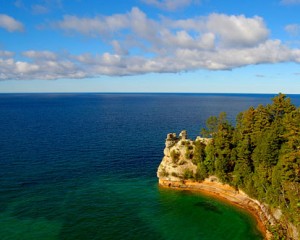 [1]“Lake Superior is the biggest, deepest, cleanest, coldest and roughest of all the Great Lakes,” said the captain of the tour boat [2] as we cruised out of Munising, Michigan, average snowfall 250 inches, to view the Pictured Rocks National Shoreline [3].

Pictured Rocks is a spectacular display of multicolored sandstone cliffs and geologic formations, soaring to a height of 200 feet above the lake, and extending for more than 12 of the 42 miles of shoreline within the boundaries of the national park or shoreline. Their different colors or striations result from the various minerals which seep out along their length, offering photographers [4] a rich palette from which to create images equal parts color, light and perspective.

Kayakers explore the many caves formed from erosion throughout the lakeshore, using the bigger vessels of course. But it is an active geological area and care must be taken not to get in the way of any collapsing rock or sandstone. The Park Ranger on our boat showed us a picture of one collapse, not unlike a calving glacier, sending spray upwards to 120 feet.

This was definitely not an Edmund Fitzgerald [5] kind of day (“The lake, it is said, never gives up her dead/when the skies of November turn gloomy”– Gordon Lightfoot), being the weekend before the 4th of July. Cruising out of the Munising Bay, past big Grand Island, the sun was shining and the wind was brisk but not chilling. Waves were only two to three feet high. It was a crystalline morning. The tour takes about two and half hours, which flew by. I enjoyed this boat tour as much as I have a recent boat tour of the most impressive architecture along the Chicago River [6] in the Windy City. These offered two different expression of the Great Lakes community in terms of natural and human resources. Neither should be missed.

On Highway 28, the road out of Munising, on the way west to Marquette, you can stop by the Fish House and buy some very fresh Lake Superior White Fish caught that day by one of the two remaining commercial fishing operations in town. They will even give you a Styrofoam cooler and ice if you don’t have your own. We grilled ours that night and enjoyed this native fish with abandonment.

Nevertheless, Lake Superior, Longfellow’s “Big-Sea-Water [7],” always merits our respect. R. Emmett Tyrrell, Jr., venerable founder and editor-in-chief of The American Spectator, recently wrote about TAS‘s first inaugural cruise this summer, in conjunction with National Review, on the Great Lakes no less. In describing [8] his ship’s passage from Lake Huron to Lake Superior, through the locks [9] at Sault Ste. Marie, Michigan, he wisely noted, “My life jacket is never far away.”

If you find yourself heading to the Soo Locks, which have been in service for 155 years, the Army Corps of Engineers have a fine observation platform from which you can make an up close and personal inspection of the very large and imposing ocean-going freighters that come through the locks having transited the St. Lawrence River and several other Great Lakes by the time they reached Superior. Nearby is the renovated Ojibway Hotel [10], now run by Ramada, which I can also recommend for those staying overnight.

Of course, to get to the Soo Locks, in Michigan’s Upper Peninsula, you first cross over the Straits of Mackinac (the “c” is silent), from the Lower Peninsula, by means of the Mackinac Bridge [11], the world’s longest suspension bridge. The “Mighty Mac” was opened in 1957 and is five miles in length. Just crossing the bridge is a breathtaking experience, especially at sunrise as my daughter and I were able to do this time. The main towers are 552 feet above the water, the roadway 199 feet. 42,000 miles of wire make up the main cables, each with a maximum tension of 16,000 tons. They weigh 11,840 tons.

From Mackinac City, on the south side of the bridge, you can take a ferry over to Mackinac Island [12], where no cars are allowed, and visit the Grand Hotel [13], built in 1887, celebrating its 125th anniversary this year. It claims to have the largest porch in the world and, having enjoyed a drink and the view therefrom, I believe it. Gentlemen and ladies (you know who you are) still have to dress for dinner.

The Island’s fudge shops are legendary and a fort, a French Jesuit mission chapel, and the Michigan Governor’s summer residence all may be found on the island, the last high on a bluff from which the reigning chief executive may survey all of his or her domain.

As to the immensity of Lake Superior, the numbers [14] speak for themselves. As described in the Lake Superior Lakewide Management Plan for 2011, a binational undertaking by the U.S. and Canada, its maximum depth is 1,332 feet, nearly equal to the height of the Sears Tower in Chicago. It can hold as much water as the four Great Lakes combined, plus three more Lake Eries for a total volume 2,900 cubic miles. It is the largest freshwater, repeat, freshwater lake in the world by surface area; and its shoreline length, including islands, is something like driving from Quebec City to Vancouver or, if you prefer, from Los Angeles to Miami — a total of 2,726 miles.

I cannot help myself. It is, truly, the Mother of All Lakes.

But the Soo Locks and even the imposing Pictured Rocks hardly exhaust the treasures to be found in the Lake Superior Basin, even before you explore the Canadian side, which I have yet to do.

Another opportunity for the traveler moving east to west along the south shore is Michigan’s Keweenaw Peninsula [15] with magnificent vistas, sprawling forests, a historic fort, and the gateway to Isle Royal National Park. The Keweenaw is a peninsula jutting out into the lake from the larger Upper Peninsula.

While on this Peninsula, you can also patronize the Jampot, a local store in Eagle Harbor, Michigan, loaded with preserves, bakery goods, fruitcakes and gift boxes, compliments of the monks of Holy Transfiguration Skete of the Society of Saint John [16], “a Catholic Monastery of the Byzantine Rite, under the jurisdiction of the Eparch of Chicago, and belonging to the Ukrainian Metropoly in the United States of America, in union with the Pope of Rome, supreme pastor of the universal Church,” embracing poverty, chastity, obedience, and stability of life. They follow the Rule of Saint Benedict and “the traditions of the Christian east” and have built a new church that displays the onion-type domes common to orthodoxy.

Unitarians and all other customers are most welcome. The monks are extremely ecumenical in their retail trade and support their community with its proceeds.

Heading further west, well east of Duluth is the town of Bayfield [17], Wisconsin, which is the jumping off point for the Apostle Islands National Lakeshore [18], an archipelago of 21 islands trailing off into the very blue and deep Lake Superior. I am informed that the French Voyageurs [19] originally thought there were only 12 islands, hence the name. Boating or kayaking around these islands is a great adventure, different but with some similarity to the kinds of experiences available at Pictured Rocks.

While working on Great Lakes issues years ago, I had the opportunity to participate in a fall tour provided by the National Parks Service when the colors were at their peak. Stunning. Previously, I had taken my family on the car ferry [20] out to Madeline [21], the big island owned by Wisconsin, and had a lovely time since, incredibly, it was actually warm enough to swim.

Alas, ardent swimmers may not find Lake Superior ideal to their purposes. Some like it hot. Some like it cold. If you are part of the latter group, the Big-Sea-Water is your kind of place.

Bayfield, headquarters for the National Park Service for the Apostles, was also the site of a POW camp for German prisoners in the Second World War and has a delightful apple festival in the fall.

From the Straits of Mackinac to the Soo Locks, from Pictured Rocks to the Keweenaw and the Apostle Islands, there are many opportunities to feel very Superior about one of America’s greatest treasures.