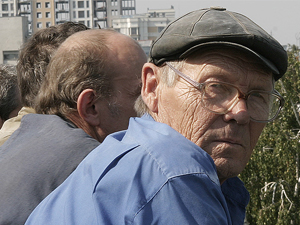 [1]“Do old men have dreams?” asked Jeanette as she watched her 88 year old father through the window of the cottage they rented for a week in the Rocky Mountains. Bill Richards was standing alone on the deck looking across a pristine aqua-marine lake after a rainstorm. It was dusk and a beautiful rainbow arched in the sky as the daylight began slipping behind a snow-capped mountain in the distance.

This was the end of another day of more than 32,000 previous days that had passed in his long life. There was something sad yet symbolic in the scene.

“Are you asking whether old people dream in their sleep?” I asked. “No,” she replied, “Do they have dreams ? goals, things they still imagine or want to do?”

At the root of Jeanette’s question was a sadness to see her once strapping and vibrant father fading in old age. Was she projecting her sadness on to him? Perhaps Mr. Richards was not sad at all and was merely enjoying a beautiful scene that stretched out before him. A fleeting moment was passing in the midst of God’s natural world as day turned to night and Mr. Richards wanted to take it in.

We must be careful not to read too much of our own perceptions into circumstances. I suspect that Jeanette was struck by a perceived metaphor and poignancy of the image before her. It was a moment that brought her underlying sadness to the surface.

She was reminded that her father was fading in extreme age, just like the day was fading to night. It broke Jeanette’s heart for she could not bring herself to think of life without her beloved father. Mercifully extreme age was giving her warning and was preparing her for the inevitable.

Mr. Richards’ wife of more than 60 years had passed away a few years earlier and he missed her terribly, but he still lived in his own home. His arthritis was well controlled as was his heart condition. His grandson mowed the grass in summer and shoveled the snow from Mr. Richards’ walks in the winter. His daughter often visited and took him places (like this vacation in the mountains).

By all accounts, Mr. Peters was a fortunate man. He had lived a good life and was well cared for in his old age.

Even Mr. Richards’ 88 years in the world is a brief span of time. The Bible tells us that a man’s life is like a mist that appears for a little while then vanishes (James 4.14). Saints Paul and Peter spoke of our bodies as tents ? a temporary abode.

Our permanent home is in heaven. Our lives here are preparation for the world to come. Mr. Richards cannot escape this reality but nor can Jeanette, or any of us. I hope that his last years were spent with sweet memories and expectant anticipation the world to come and not regrets.

If Mr. Richards dies in peace and reconciliation with God, through Jesus Christ, he can joyfully anticipate the Resurrection of the body just as he confesses in the Apostle’s Creed. He can rest in confidence knowing Christians have believed since the beginning. The Church teaches:

“We firmly believe, and hence we hope that, just as Christ is truly risen from the dead and lives for ever, so after death the righteous will live for ever with the risen Christ and he will raise them up on the last day,” (Catechism of the Catholic Church, No.989).

This resurrection of the dead is not figurative or wishful thinking. Just as Jesus was physically raised from the dead so shall those who die with their faith in Christ. Their immortal souls continue after death and their mortal flesh will come alive again at the resurrection and be reunited with the soul in a glorified state (See CCC Nos. 366 & 997).

For those of us whose bodies here on earth are degenerating either by disease or age can look forward to this. We shall be restored and live in glory with our Savior. On this truth I stand with the Church in joyful anticipation.

For all anybody knows, God may have been talking through creation to Mr. Richards as he watched the sun setting behind the mountain that day. The sun sets but also rises.