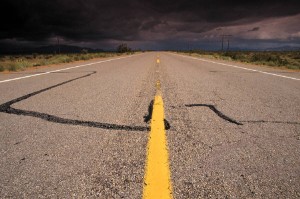 [1]One of my simple pleasures in life is reading Victoria [2] magazine. The May/June 2013 issue features an article called “Destiny’s Detour.” The editors had asked readers to share stories of how their lives had turned out compared to what they thought life would hold for them when they graduated from high school or college.

Victoria is a secular magazine so God doesn’t play a major role in these stories, although Merrie Beth Scherff of Ohio did acknowledge that “I made my plans, but someone else directed my steps into so much more than I ever could have dreamed.” Those of us who live by faith can see God’s hands at work in the way our lives play out. Admittedly, this can often be seen only in hindsight.

I graduated from college over fifteen years ago. As I sat there in my cap and gown with my newly minted degree in history and art, I was very excited about my future. I was headed to graduate school to study history and hoped to someday be a college professor. I thought that would be a great career that I could balance with being a mother which I also hoped someday to be. I spent that summer working in an art print and framing shop and dutifully making my way through the hefty pile of summer reading.

In August, I received a random call from the career services office at the college I had just graduated from. They had a part-time position in the Continuing Education office and were wondering if I might be interested in applying. To this day, I have no idea why they called me, but I did apply and got the job working evenings and weekends. Come September, I started my graduate program, only to decide within a couple days that it wasn’t for me. I decided to withdraw. That was one of the hardest decisions of my life. I felt like I had to explain and apologize to all the people who had supported me, but even though I had no long-term plan, I felt like I had made the right choice.

I worked two other part-time jobs in addition to the one at the college until April, when I was offered a full-time professional position. One of the benefits of being full-time was that I could go to graduate school at the college for free. I jumped at the opportunity. The school only had two graduate programs at the time – education and theology. I knew I didn’t want education, so I chose theology.

I always had a great interest in religion and the default choice proved to be a perfect fit. I had no plans for what I would do with the degree, but a Master’s Degree was always a plus working in higher education. If people asked what I would do with the degree, I would simply say it was for personal fulfillment. I ended up defending my Master’s thesis when I was eight months pregnant with my first child. It seemed that degree would be of little professional consequence, but was merely a personal accomplishment that I could be proud of.

Fast forward a few years. I now had two small children and was no longer working at the college. I was meeting with a spiritual director and struggling to find my place and purpose in the world. I wanted to know what God wanted from me. One night, I was putting away laundry when the thought came to me clear as anything – “You have a theology degree and you can write. Write.” It was one of the few times in my life that I’ve received a true calling from God.

I’ve spent almost a decade writing about faith. That degree I thought I would never use has become my life’s work. Hopefully, I’ve also helped some people along the way.

In the meantime, I started homeschooling, discovered I was raising a child with Aspergers, and became a foster-mother to two small children. None of these were anywhere on my radar when I was twenty-one. I often have said that “I plan and God laughs.” But looking back, I can see God’s hand in all of it and the ways that He prepared me for this life and helped shape the path. My life has definitely been full of divine detours.

Looking back over your life, where do you see God’s hand? What are some divine detours your life has taken? Please share your stories in the comments below.