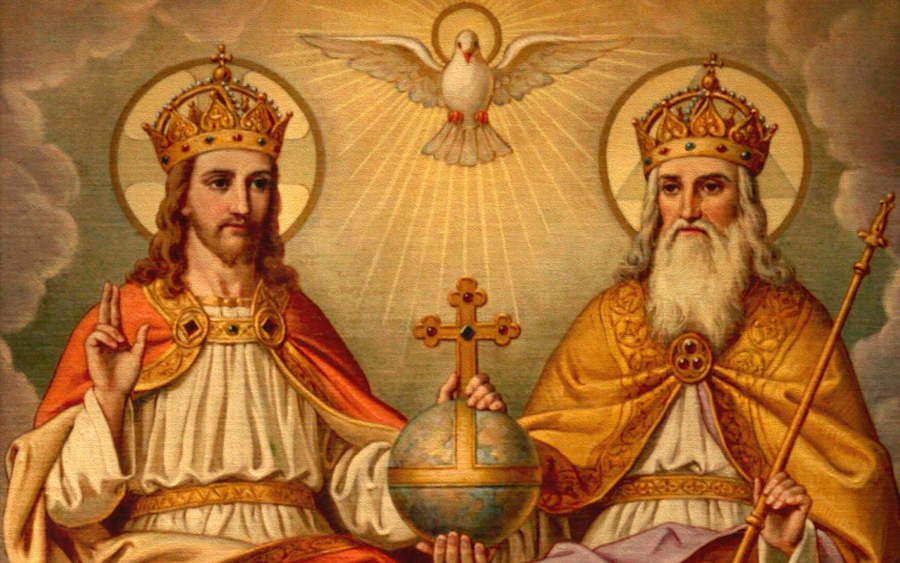 [1]Every time we make the sign of the Cross we make an invocation of the Holy Trinity: “In the name of the Father and of the Son and of the Holy Spirit.” Those who grew up as Catholics, or in other religious communities with an orthodox understanding of this Triune nature of God, may take this doctrine for granted and not comprehend the extent to which it has historically been assaulted and still is attacked today.

It was very rare to meet any Christian, Catholic or otherwise, who could answer my objections to the Trinity doctrine. One reason for this is that most people think it takes special learning in theology to handle these objections. However, theology should not frighten us or be seen as an esoteric pursuit beyond the capacity of the average Catholic. Basically “theology” means the study of God and coming to know God is something the Church has done, is doing, and will continue to do in an institutional sense, but it is also something every Christian is doing in an ongoing way. There is no question of doing it; the question is whether or not we are doing it well. The Church doing theology has led to the development of Christian doctrine and specific to this discussion, has led to the development of the doctrine of the Trinity.

This surprises some people, who yet accept easily that other bodies of human knowledge develop.  In fact all bodies of human knowledge develop. The development of doctrine is not the same thing as the invention of new teachings; it is rather a deeper penetration of understanding. There are tests to distinguish a legitimate development from a deviation (heresy). And by the way, that doctrine develops and that there are tests, is itself doctrine.

Christian doctrine develops in response to challenges, questions, and experience

We can see Christian doctrine developing already during the brief New Testament period. The early Church was expecting the imminent “end of the world” but their experience, their continuation through history, was already causing their eschatological doctrine to develop. Compare 1Thess. 5th with  Phil. 1st to see that development within the pages of Scripture.

We can also see this in our living memory. In the 20th century, the Church has confronted historical criticism as a challenge to the “inerrancy” of Scripture. This has prompted further development of the doctrine regarding the inspiration of Scripture.

The Development of the Christian doctrine of God

Some parts of the Christian doctrine of God are evident to reason. As an example let’s consider five logical options for the nature of God given that God is either finite or infinite and that God is either personal or impersonal.

1. God could be finite and impersonal. God would be a mere object, like a chair, or a flower. No one claims such a god and no one ever has. Even idolaters think their idols represent a personal being.

2. God could be finite and personal. The ancient Greeks and modern Mormons both subscribe to this option.  (Mormons claim that God is “infinite” but posit many such “infinite” beings, hence redefining “infinite” to mean finite.)

The problems with this option are that you need a god big enough to explain the universe, and a finite god just doesn’t cut it. The Greeks and many other peoples solved this problem by positing different gods for different elements or spheres. Mormons have various gods for different planets.

3. God could be infinite and impersonal. This is the concept subscribed to by Pantheists; Buddhists; some Hindus; some New Agers; Spinoza.

The main problem with this conception of God is the question of the origin and purpose (telos) of personality. Everyone recognizes that a person is something greater than a non-person. If the origin of persons lies in the non-personal, we are left with the question of how persons came into being from that which is less than personal. Buddhism solves this problem by making personal existence a mere illusion. Some philosophers try to solve the problem by reductionism – attempting to reduce what is personal to the non-personal through a biological mechanism. There are theories of “emergence”: the idea that if mechanical or biological systems become complex enough, personality emerges from them. These theories drive a lot of research into “artificial intelligence.”

4. God could be infinite and personal simple unity. Islam and Jehovah’s Witnesses both make this claim about the nature of God.  (JWs claim that God is “infinite” but limited to a particular location, neither omnipresent nor omniscient hence redefining “infinite” to mean finite.)

One of the problems with this view of God is that God cannot reveal who He is apart from creation. For example, He cannot be “love” because he could not love without creation. Jehovah’s Witnesses will say, because it is in the Bible, that “God is love.” But their concept is of a God who is dependent upon creation to have somebody to love. At the same time, creation does not reveal a God who is simple unity, because we do not see just one of anything in the universe.

5. God is infinite and personal unity-in-diversity. This God is love; He creates out of complete free and gracious generosity because He is complete in Himself, not needing His creation to be anything or to express anything. This is the sublime orthodox Christian understanding of God. This God is revealed in creation, through His dealings with human beings in history, and through the Incarnation.

God has revealed Himself

God also prepared the human family for revelation of Himself through the Hellenization of the Jews. The Diaspora was no accident (Duet 32: 8). The Church would need the language of Greek philosophy to express herself about Christ. Regarding St. John’s use of the Greek term “Logos” in John 1:1, Romano Guardini wrote: “In order that this conception of the Logos, idea and source of all ideas, stand ready to serve sacred Christology, Greek thought labored for six centuries” (The Lord, p. 538).

Once Christ came on the scene, the Church, under the guidance of the Holy Spirit, had to steer a course through various proffered explanations of Jesus Christ.  Remember our earlier point that Christian doctrine develops in response to challenges, questions, and experience. Here are explanations of Christ (challenges to the received apostolic teaching) rejected by the Church:

And here are some explanations of the Godhead rejected by the Church:

Christian doctrine is a tapestry; if you pull one thread out you unravel the whole thing. The Church had to maintain and unify these points:

The Christian doctrine of God says:

There is one personal God whose unique nature it is to be each and all of the following: self-existent; eternal; infinite; omnipresent; omnipotent; omniscient; immutable.

This God is the Creator of all that is and is, therefore, each and all of the following in relation to Creation: Lifegiver, Sustainer; King; Lawgiver; Judge; Redeemer; Sanctifier.The acts of God in Creation and Redemption are the work of the Holy Trinity.

Christian doctrine does not say:

Loving the Holy Trinity with Your Whole Mind

Jesus commanded us to love Him with our whole mind, with our whole heart, and with all our strength, and He gives us the grace to do it. Whoever fails to reach this goal has not lived his life entirely – St. Frances de Sales

Love the Holy Trinity with your whole mind by defending this true doctrine. Learn to overcome these common objections:

The Catholic doctrine of the Trinity is an elevated conception of God that leads to an elevated conception of the dignity of the human person. It is the revealed truth that God, who wants us to know Him, has given to humanity and over which He has made His Church a guardian. So take up the challenges that your Catholic forbears have taken up and even died for. Believe in the Trinity; defend the doctrine of the Trinity and dive deeper in your knowledge of God.

A blessed Trinity Sunday to you!